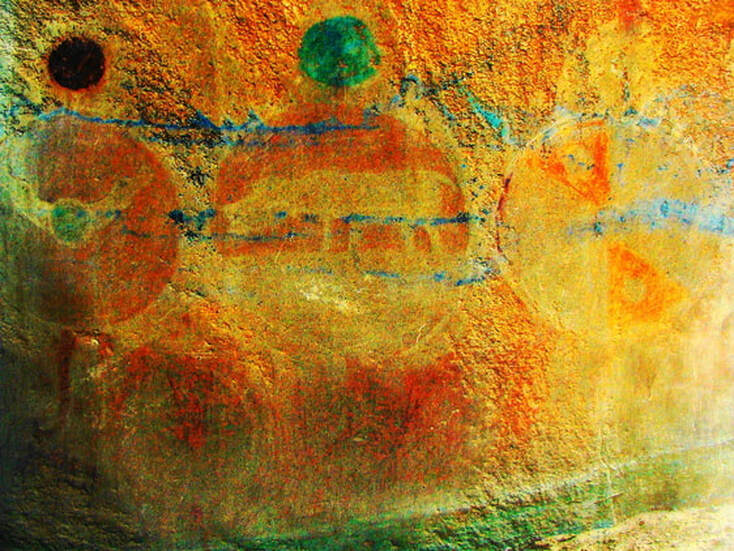 Click on the word "MORE​" at the top of each page to access a drop down box that will
link you to more pages of the Montana Megaliths.
​
Please contribute to our ongoing research and YouTube Production
Join us on Patreon:
https://www.patreon.com/montanamegalithsusa
CHANGING OF THE WORLD GLYPHS 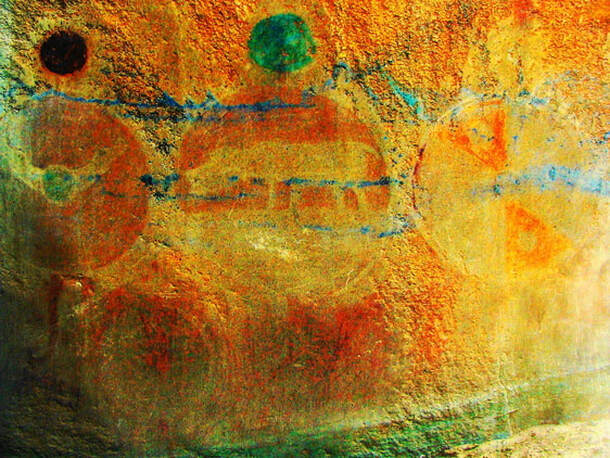 FIRST, SECOND AND THIRD WORLDS
My husband and I often visit the valley in Montana where these pictographs were painted.  It is the largest polychrome pictograph site in North America where 110 panels have been re-discovered so far.  Leon Secatero, former Navaho Headman, taught me that the ancient pictographs are read from right to left and bottom to top.

The Changing of the Worlds Symbol (an hourglass) is depicted in the far right glyph. At the center of this symbol is a circle representing zero. The concept of zero is not the void, nothingness or the null point. It is more the concept of the center still place vibrating with potential energy awaiting manifestation in the material world. The Navajo draw this symbol in sand emphasizing the center circle.

The Popul Vuh is an ancient Mayan text that tells of the Changing of the Worlds.  This pictograph which anthropologists categorize as "shield warriors" is actually the legends of the Five Worlds exactly as described in the Popul Vuh. I typed an English translation of the Popul Vuh when I was in my early twenties so when I first viewed this glyph I knew exactly what the symbols meant.

We are currently transitioning from the Fifth World "the world of green..the world of glitter" into the Sixth World.   Many of the Indigenous Elders say that the world has reached a positive time line and that this destruction may be mitigated into a transcendent world of peace.

The Sixth World will be the World of Crystal. Our current technology is based on quartz crystal which is silicone computer chips.

The First shield warrior's head has no pigment representing the world of no color.  The second shield warrior's head is aqua blue--the color of water . An animal is depicted on the torso.  A red head appears on the third warrior glyph--the color of fire.  Around the neck of the third "shield warrior" is a bluish-green necklace medallion of the blue and green planet earth and our orbit through space. On both sides of the earth a separate circular object with two greem dots is shown depicting near earth objects. 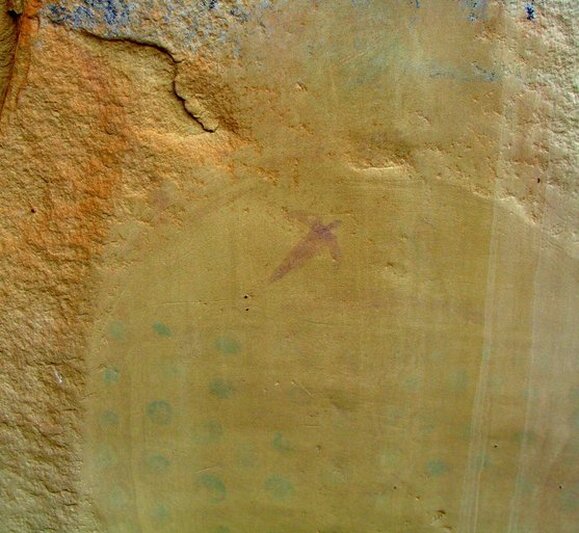 FOURTH WORLD
At first we could not find the Fourth World glyph. There was a blank space between the Third and Fifth World.  Then as I became more adept at using the transmitter crystal to obtain information, I took the crystal to the site and positioned the crystal touching my third eye with one end of the double terminated crystal and placing the other end on the third eye area of the glyph of the First World.

I downloaded the information suddenly seeing in the crystal that the glyph was lower down and to my left. My husband, Bill, dug out the sand and there on the red sandstone wall of the canyon, between the third and fifth world glyph, was the fourth world shield figure exactly as predicted in the Popul Vuh. 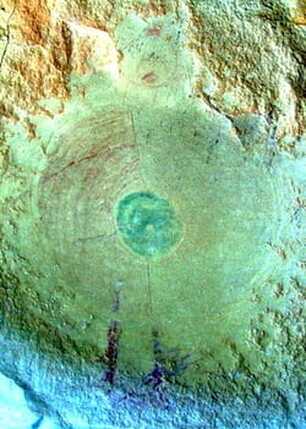 This Fifth World glyph is on the same level as the first three above and to the left of the Fourth World glyph. The legends talk about seven tribes migrating into the fifth world. Notice that there are seven migration signs coming together on the left foot as the leg extends to the center of the green circle representing the Fifth World. These same migration signs are bird feet type glyphs that are all over Chaco Canyon in New Mexico.
​
The center of the torso is green.  According to the Lakota there are five elemental forces which are fire, water, air, earth and green.  Green describes the life force.
I asked the transmitter crystal to show me how the glyphs were painted here in Montana. The Navajo repainted them when they passed through about 1200 AD on their way south.
​
​
Skulls with elongated heads in the adjacent valley
​
Bill and I were thrilled to see a herd of buffalo as we were approaching the area of the valley where the Changing of the World Glyphs are located in the wild lands of Montana. I took these photos of the buffalo in September of 2022.

​
Ancient civilizations built similar megalithic constructs all over the world in the far distant past. The same language appears in these ancient glyphs, on ceremonial objects, on calendars and in art forms. Language experts refer to the American examples as Pre-Classical Sanskrit. Several of the symbols of this ancient language referred to as the Star Nation Language are carved in and painted on granite and limestone walls here in Montana, in the USA.

The Changing of the World (hourglass) is drawn in the sand over and over as the stories of the Ancient Ancestors are told. This symbol designates the end of one World and the beginning of the next. If the top cross bar is missing that world has not occurred yet according to Leon Secatero, former Navajo Headman.

Since I first wrote about the Changing of the World Symbol in 2012 several examples have been sent from friends around the world. Thank you all for your contributions to the growing body of knowledge.

By far the best documentary ever - THRIVE - illustrates the function and implications of the TORUS. No wonder this configuration is found throughout the ancient world.  It is the basis of all knowledge.
https://www.youtube.com/watch?v=lEV5AFFcZ-s

Changing of the World Symbol is an hourglass configuration that represents a wormhole/torus/tunnel between dimensions in time and space. This symbol is found throughout the ancient world and more recently discovered in crop circles and cymatic symbols. Changing of the World Symbol is a hypothetical topological feature that would fundamentally be a shortcut through space/time. A wormhole is much like a tunnel with two ends, each in separate points in space/time. 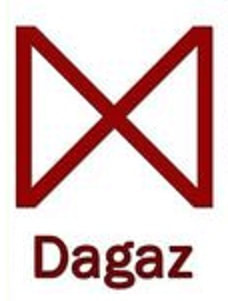 ​The Germanic Futhark Dagaz rune is based on a much older Changing of the World Symbol. "Dagaz, the last rune of Futhark means literally "Day". The esoteric meaning of the Dagaz rune symbolizes the fulfillment and achievement. Dagaz is the rune of the awakening, of dawn and of the day rise. The rebirth in the Light. Dagaz also symbolizes the fulfillment at the end of the initiatory path." (Wiki) It all fits together.
ACCESSING THE GLYPHS
In ceremony on the Navajo we are taught to drop corn pollen, tobacco or corn meal and step on it four times leading up to the glyph. Then in a meditative state we touch the glyphs and "download".

My first experience was placing my left hand on a glyph of a five fingered hand print and my right hand on the three fingered print...then the four fingered print...then the six fingered glyph. The instructions were that we were to make a commitment to work with the Star Nation People that the hand prints represented. I placed my right knee in a concave area and touched the glyphs. I felt as if I was falling into the sandstone wall.

Vast visions and information came to me. It was like traveling through a star gate. When the visions stopped I sat down and began drawing glyphs and star systems in the sand. Leon Seatero watched me for a while and asked what the glyphs meant. It told him my understanding so far and he replied, "You are the one we have dreamed of...come with me." Then I was instructed to bring my husband next time.

Leon took me to this glyph and later asked me to photograph it.
THE GIFT PETROGLYPH
PICTOGRAPHS AT GATES OF THE MOUNTAINS COMPLEX 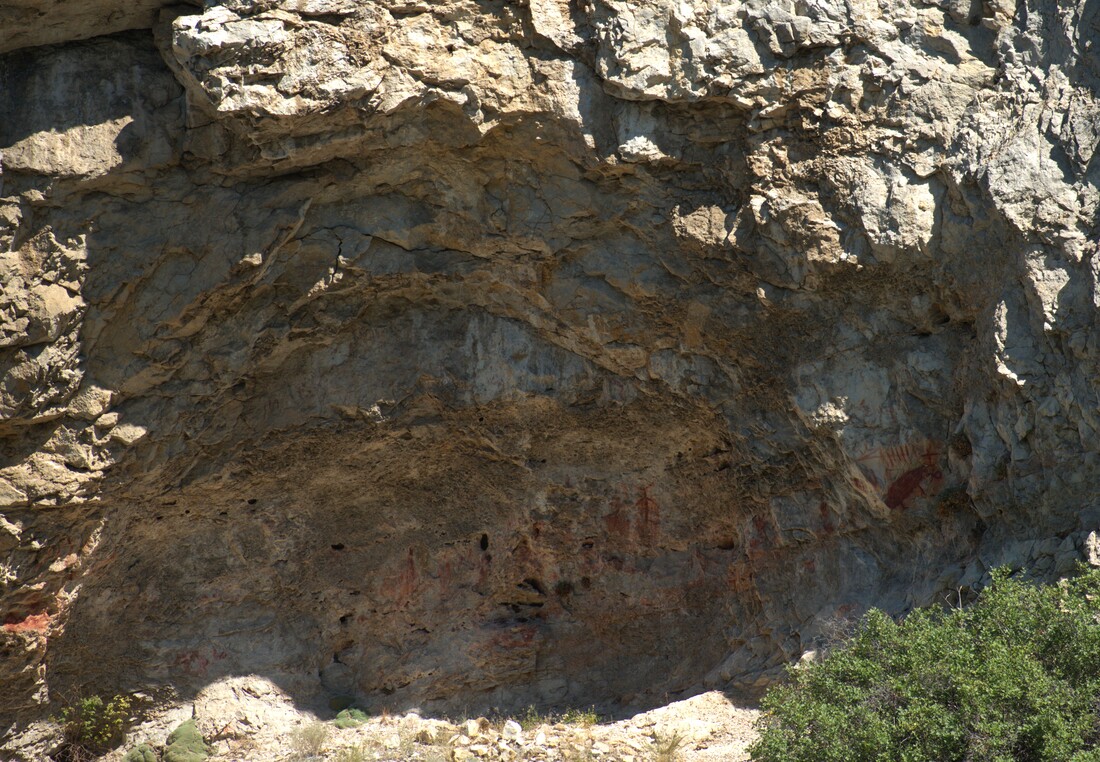 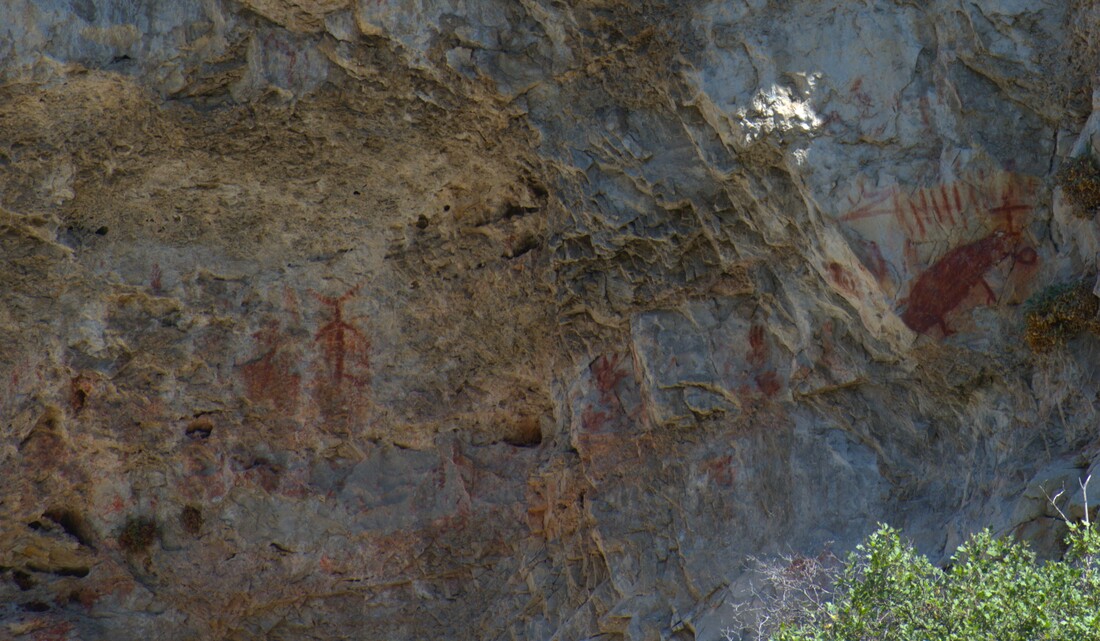 ASTRO-ARCHAEOLOGY AT THE MONTANA MEGALITHS

​Years ago while hunting for rock art near Helena, Montana USA I was led to a white rock outcropping above Canyon Ferry Lake on the Missouri River. Much later, after seven years of discovering and researching the Montana Megalith I have learned to "see". I returned to the pictograph site and photographed the rocks just above the glyphs from just the right angle. There it was. The silhouette of an ancient stone face that I named White Face.

Michael Pell figured out the astrological correlations related to the animal imagery in this pictograph panel and illustrated these findings with a star map of the constellations and their relative positions.
Below the White Face is very sophisticated rock art. A fish appears with a huge eye and three-dimensional scales fading to black at the tail fin. In the ancient system of astrology the fish symbol represents Pisces.

A silhouetted horse head. chest and and front legs emerges from a fissure in the rock wall. The left front hoof morphs into fingers. The constellation of Pegasus is represented by a flying horse.

Note how the artist used the curved rock to enhance the eye and the beak of the Eagle or Thunderbird. Stripes in the rock create a feathered flowing movement. The Thunderbird or Eagle represents the constellation of Aquilla. "Aquila is a constellation on the celestial equator. Its name is Latin for 'eagle' and it represents the bird that carried Zeus/Jupiter's thunderbolts in Greek-Roman mythology." Wiki
​
ORION GLYPH---BIG DIPPER SYMBOL
I took this first photograph of the Orion glyph in New Mexico in 2007 with permission from the Navajo Elder after the yearly ceremonies. The design is extruded (protrudes outward from the stone) as opposed to carved into the stone like the similar design in the British Isles and Italy. I photographed other glyphs in the same area in New Mexico that were carved into the stone.

The "Swastika Stone" is a stone adorned with an ancient sun symbol located on the Woodhouse Crag in West Yorkshire, United Kingdom.
This design is unique in the British Isles according to Wikipedia. However, the same glyph appears in Italy and New Mexico in exact detail including the nine cup marks.
http://en.wikipedia.org/wiki/Swastika_Stone
​
Wayne Hershel shows and correlates this same image at 3:47 minutes in this short video: https://www.facebook.com/wayneherschel2/videos/396438439056352 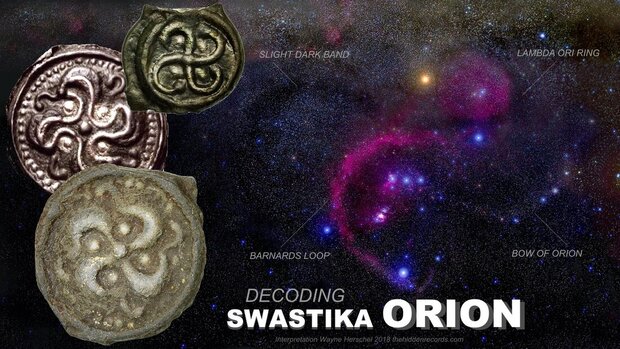 ​Wayne Hershel
https://www.facebook.com/wayneherschel2/videos/396438439056352
For more information about the pictographs and petroglyphs in Montana see this page on my first website:
https://www.galacticfacets.com/ancient-pictographs.html
Montana Megaliths You Tube Channel:
https://www.youtube.com/channel/UCdFeIhHZdjebI7WPgN-guhQ​