​Click on MORE at the top of each page to access a drop down box that will link you to more pages of the Montana Megaliths.

Every element on this page was discovered and photographed by Julie Ryder unless otherwise noted.
​

Please contribute to our ongoing research and YouTube Production
Join us on Patreon:
https://www.patreon.com/montanamegalithsusa 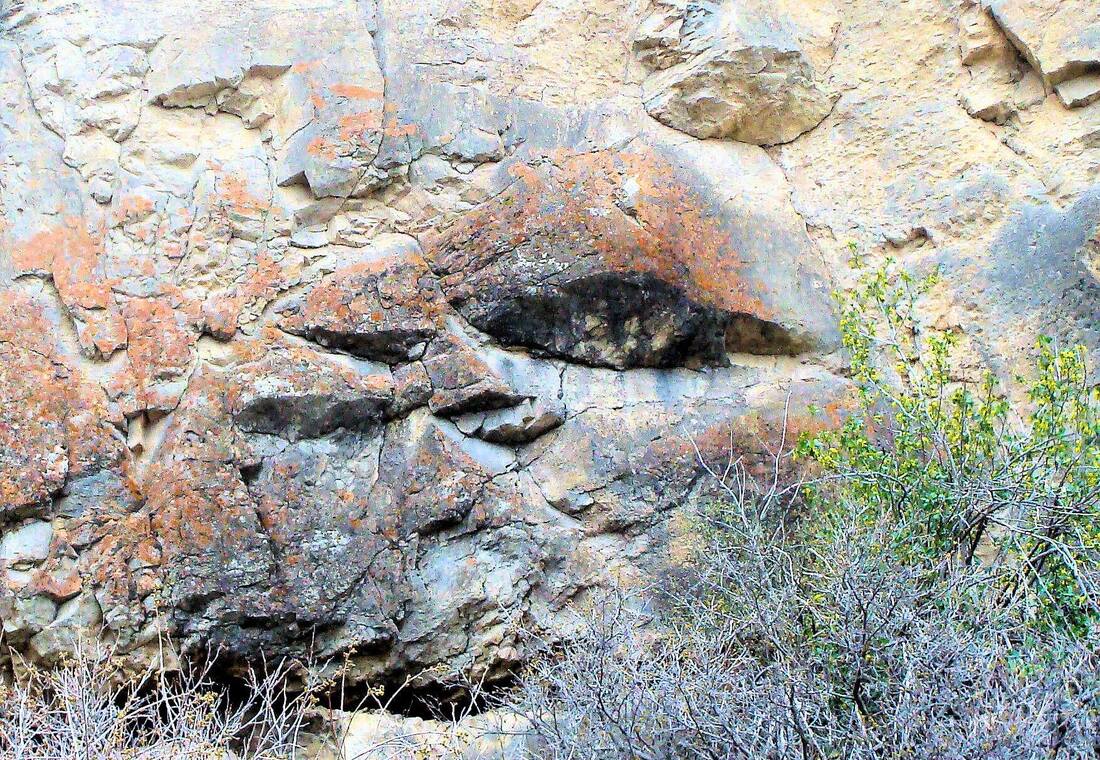 Gazing into ancient eyes that never blink is like a synesthesia, time warp, multi-sensory experience.  In one dimension of consciousness I feel and smell their breath on my cheek while on another level it is only the wind.
​
Many of the flash fossilized beings that are being discovered at the Montana Megaliths are described in ancient literature, scrolls, cylindrical seals, and appear in petroglyphs, paintings, ceramics, bas relief, statues and artifacts of several ancient cultures.
​
Since most of our true history has been destroyed or repressed we have been taught that these ancient beings are only fantasy creatures arising out of imagination and nightmares. I am currently discovering rock solid evidence that many of these phantasmagorical entities were real, biological, flesh and bones living beings in the far distant past.
Nestling into the tear duct of Dragon Madeline, I sense my own
tears flowing down my cheek.
​ 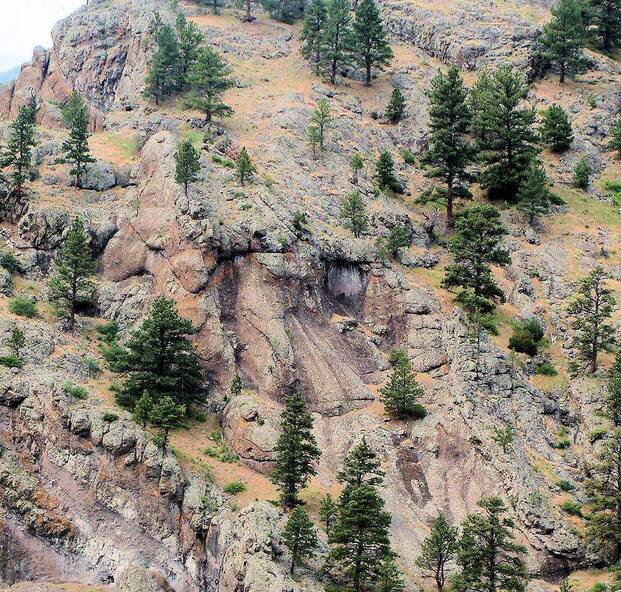 The Visionary's right eye can be accessed through astral travel. In my experience it
is like a 5-D movie screen showing previews of past and future experiences in
​the multiverse. Lavender colored lights whispers "REMEMBER".

​Dragons Lair presents a panoramic scene poised to reveal the intimate relationships of tribal clan connections through the epochs of linear time.
​
WAS SATURN THE HOME PLANET OF THE BEINGS IN THIS PERMUTATION OF THE MONTANA MEGALITHS, USA
Tristan Saturn, a black bearded masculine being with two sunken eyes and a broad smiling face is positioned high up on a cliff wall of the Asgard Complex in the Montana Megaliths North. An inlaid stone pattern of Saturn is featured in black and white inlaid stone engraved into a smooth, polished panel on the left cheek.

Was Saturn the home planet of the beings that built Asgard Complex in the Montana Megaliths East? The iconography here is similar to the Nordic Viking culture.

Images of Saturn and ETs were found in a cave in Central Mexico along with 3,000 artifacts.
​
Driving miles up the winding dirt road to the head of the Holter Lake and beyond I found a high vantage point and photographed the top of what appeared to be a geodesic dome with a circular protrusion on one side. The stone dome reminded me of the Death Star in the Star Wars Movies and so I named it LifeStar. Next to the stone dome was a huge six pointed star at the base of a humongous stair way that formed a half circle up to a pyramid on the top. I named the site Temple of the Winds.

"Saturn has a lot of moons. Two of them are really odd, and bear a striking resemblance to the Death Star from the Star Wars movies. Mimas has a crater of approximately the same scale as the one on the Death Star. Iapetus also has large craters, but the resemblance lies in its equatorial ridge." (1)

1. Mimas And Iapetus, Two Odd Moons Of Saturn
Posted on Mar 3, 2010 by Paul Tomaszewski.
http://astroblog.cosmobc.com/2010/03/03/mimas-and-iapetus-two-odd-moons-of-saturn/?fbclid=IwAR3fRD9jcmjikxMPlnwD1AGE4nYER-xHbOi7Q8y-YIZy_AQ7iWqtoI4iLvM
THREE SASQUATCHES IN THREE DAYS
It must be time for these ancient beings to reveal themselves. I discovered three Sasquatches in three days. The first was a bas relief I named Pointy due to his pointed head.  Sasquatch Pointy was found on May 5, 2022.

Second was a large flash fossilized Sasquatch named Hairy perched high on a tower above the Missouri River. I found him on May 6, 2022.

The third is a geosculpture that I just discovered on Google Earth. His white eyes and teeth are visible from the satellite above. Measuring on the Google Earth scale Sasquatch Geosculpture covers about 15 miles from head to foot.  Late on the night of May 7, 2022 while exploring Google Earth there he was. 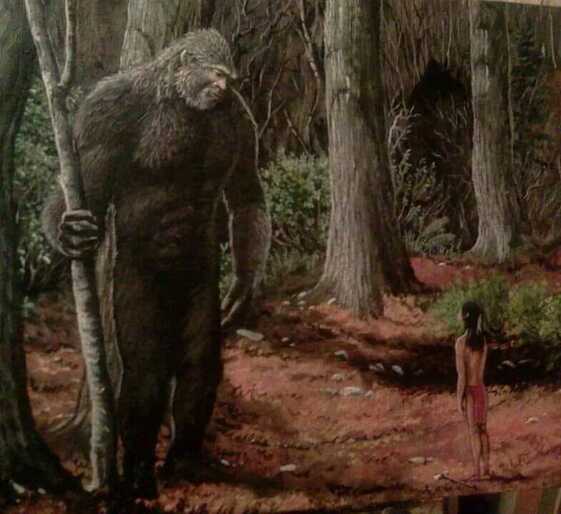 John Bigeagle Jr. wrote:
Ohunkakan O'oyake . . . .
"The Lakota, call Bigfoot Chiye-tanka "ciye" means "elder brother" and "tanka" means "great" or "big". In English, though, the Lakota usually call him "the big man".
"There is your Big man standing there, ever waiting, ever present, like the coming of a new day," Oglala Lakota Medicine Man Pete Catches. "He is both spirit and real being, but he can also glide through the forest, like a moose with big antlers, as though the trees weren't there... I know him as my brother... I want him to touch me, just a touch, a blessing, something I could bring home to my sons and grandchildren, that I was there, that I approached him, and he touched me."
Ray Owen, son of a Dakota spiritual leader. "They exist in another dimension from us, but can appear in this dimension whenever they have a reason to. See, it's like there are many levels, many dimensions. When our time in this one is finished, we move on to the next, but the Big Man can go between. The Big Man comes from Creator. He's our big brother, kind of looks out for us.
The existence of The Big Man is taken for granted throughout North America, and so are his powerful psychic abilities. The Big Man knows when humans are searching for him and that he chooses when and to whom to make an appearance, and that his psychic powers account for his ability to elude man's efforts to capture him or hunt him down.
In Native culture, the entire natural world, the animals, the plants, the rivers, the stars is seen as a family. The increasing appearances of the big man are not only a message or warning to the individuals or communities to whom he appears, but to humankind at large. A messenger who appears as a warning from Creator that man's disrespect for his sacred instructions has upset the harmony and balance of existence! 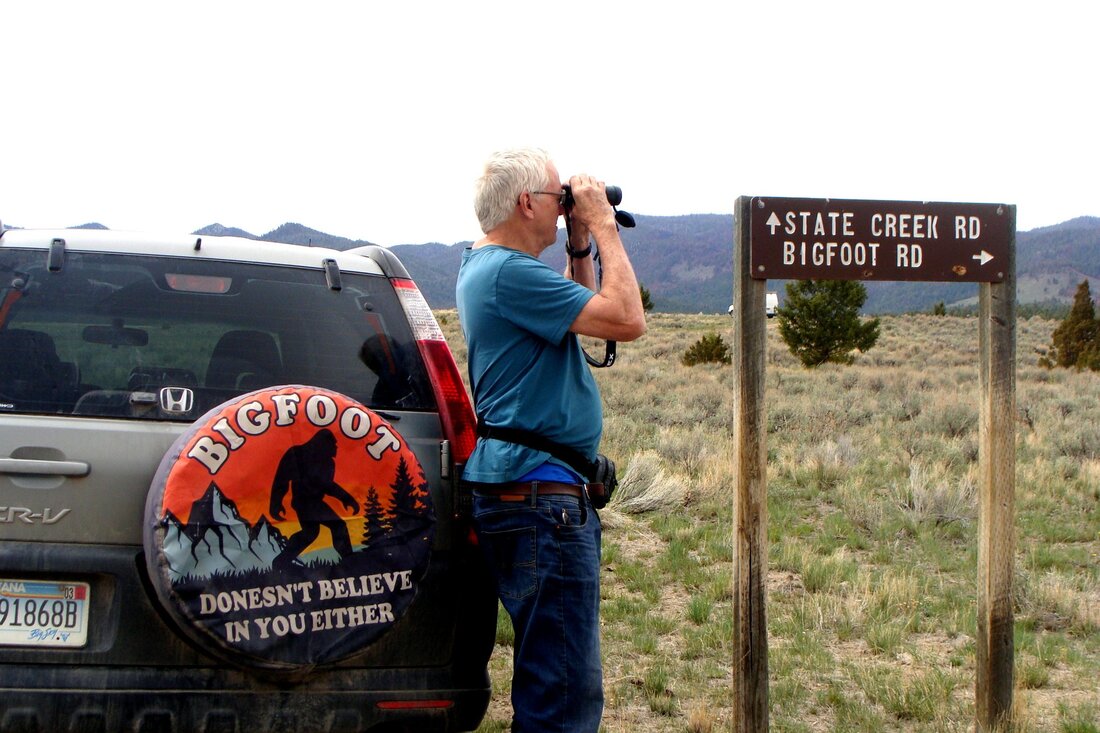 Bill Ryder searches for Big Foot along Big Foot Road in the Montana Megaliths, USA
TIBETAN BOOK OF MAGIC
A Tibetan Book of Spells may be the earliest surviving compendium of Buddhist Magic. Found in a cave near the town of Dunhuag in Western China by a monk in 1900, it is one of several thousands Tibetan manuscripts from the cave however it is uniquely different from the others.

"A variety of non-human beings populate the Buddhist magical texts from the earliest examples onward.  It is difficult to know what to call this general category of nonhumans that populates Indic literature and the Buddhist cultures that drew from it.  The term "demon" even more than the word "magic" is heavily loaded with negative connotations. The more neutral "spirit" is often used, but the strongly ethereal implications of this word are equally misleading. One thing we know about many of these beings is that they were considered to be physically present, often massively so."

Sam Van Schaik chose to "translate the names of these creatures, using the names of roughly comparable creatures from the European tradition.  So, for example, "yaksas" are large, humanoid physically imposing beings, similar to the European ogres. They are often part animal with the most common form having the head of a tiger."

"The serpentine creatures who live in bodies of water and are known as "nagas" were associated with subterranean creatures in Tibet called "klu" and the Chinese dragons called "long".  In India the angas have snakes's bodies and human heads.  They can vary in size from litter bigger than a snake to the large creatures we usually associate with the world "dragon". 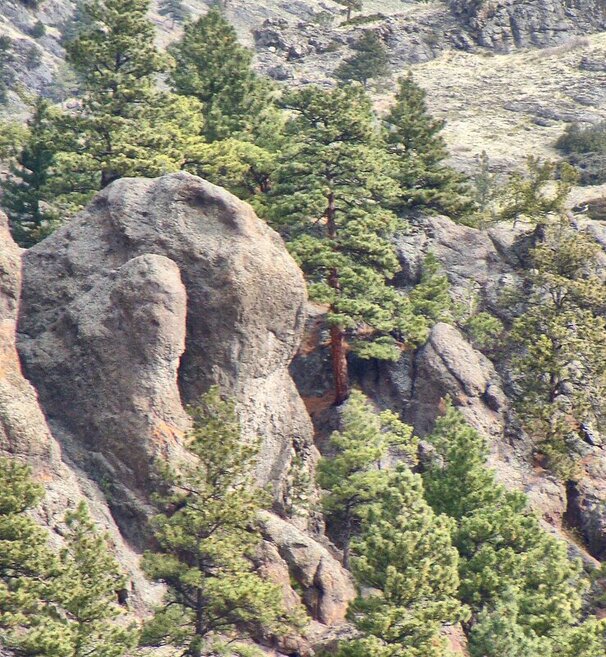 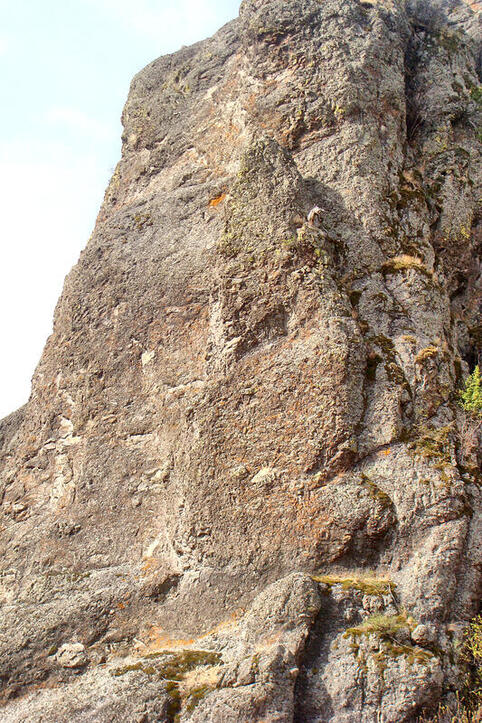 Sasquatch Pointy at Hardy Bridge Complex
​
When I asked to remember and understand I was given detailed instruction which I recorded in my notebook along with some rough sketches. When I returned home I booted up Google Earth and sure enough there it was just as I envisioned.

​Just above the helm of the Elfin Warrior the needle of the Eye Compass on Epic Episode points to 2:00 o'clock. Looking down on the Epic Episode on Google Earth I spin the compass to 2:00. A huge ancient male face appears back to back with a reptilian head. Epic Janus.
​ 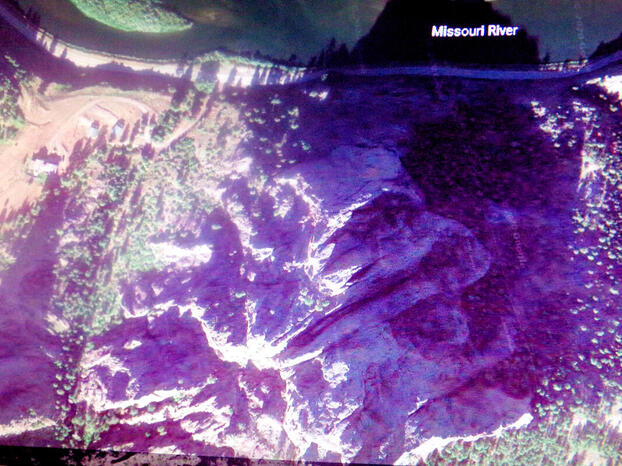 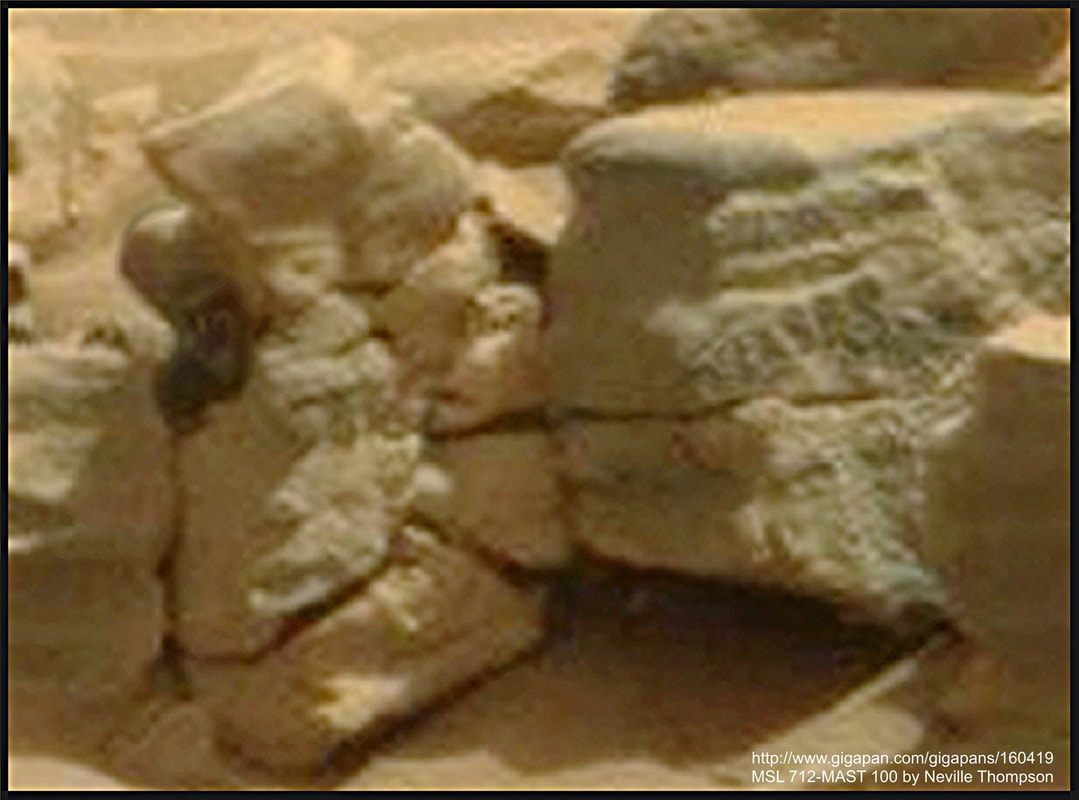