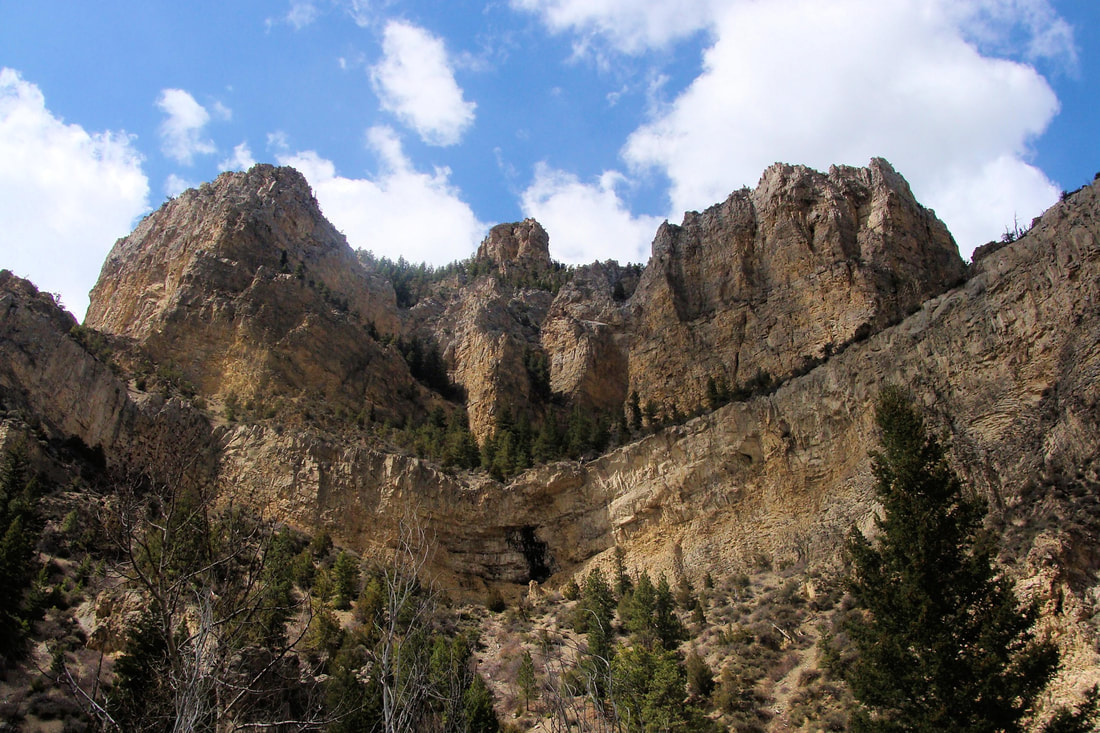 Click on MORE... at the top of each page to access a drop down box that will link
you to more pages of the Montana Megaliths
​
ASGARD COMPLEX
Asgard Complex was discovered by Brit Garrett on May 3, 2021. Eagle Mount Amphitheater was discovered and documented by Julie Ryder in 2018.  Both sides of the canyon are covered with Flash Fossilized Beings that appear right out of the Norse Legends.

EAGLE MOUNT AMPHITHEATER
See Eagle Mount Amphitheater through the lens of a drone at 2:51 minutes:
Montana Megaliths 1 on You Tube
https://www.youtube.com/watch?v=EHCT0NoOrEc
I discovered Eagle Mount Amphitheater on November 27, 2018. Early that morning I had found the Green Avian Geosclulpture on Google Earth. As I was familiar with the road that led to Hogback Mountain, which is the eye of the geosculpture, I jumped in my rig and headed out on yet another exploration. An eagle flew over me and as I got out of the car for a better view, I looked up and there was the Eagle.
On the south side of the head of the Eagle Mount Amphitheater is the silhouette of a stone image I named Queen of the Eagles. Her facial features are remarkably preserved. Her mouth is open and she appears to be singing. A rondelle over her left ear is apparent much like the Lady of Elche statues found in Spain.  The right eye of the Eagle morphs into the rondelle over the Queen's left ear.

A front facing image of her male cohort is below to her left. His facial features are also distinct and you can even see that he parted his hair on the left side.

You can see these images from a drone perspective starting at 2:51 minutes on the Montana Megaliths 1 video by Trenton Downum. This is how I discovered them...I just happened to pause the video at 3:08 minutes and there she was...Queen of the Eagles.

See Eagle Mount Amphitheater through the lens of  drone at 2:51 minutes:
Montana Megaliths 1
https://www.youtube.com/watch?v=EHCT0NoOrEc​
MIDGARD MIDDLE EARTH
Formations that appear like the remnants of an ancient city rise above the flowing stream at the Asgard Complex in the Montana Megaliths East. I have named this area Midgard which is the Old Norse name for Middle Earth.

Midgard, (Old Norse: Middle Abode), also called Manna-Heim (“Home of Man”), in Norse mythology, the Middle Earth, the abode of mankind, made from the body of the first created being, the giant Aurgelmir (Ymir)---Wiki
​ 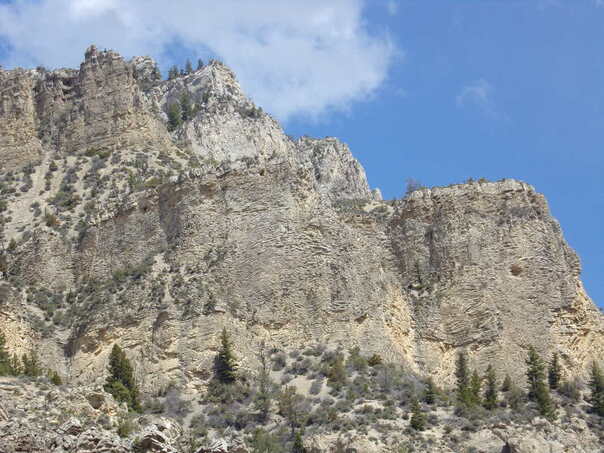 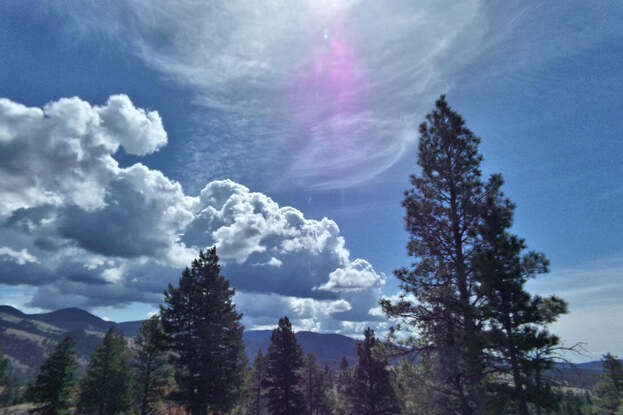 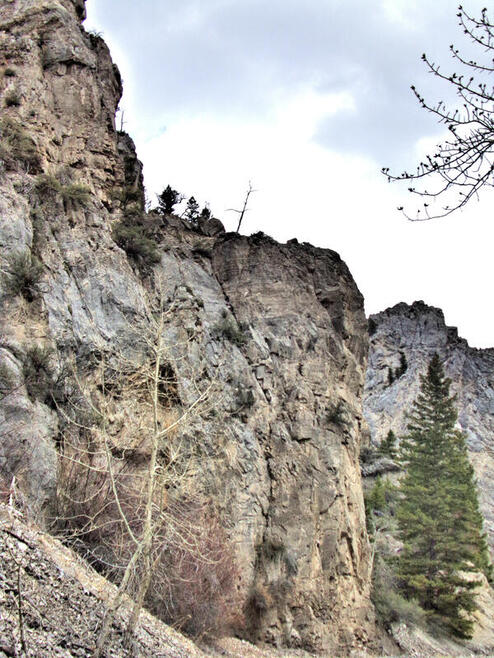 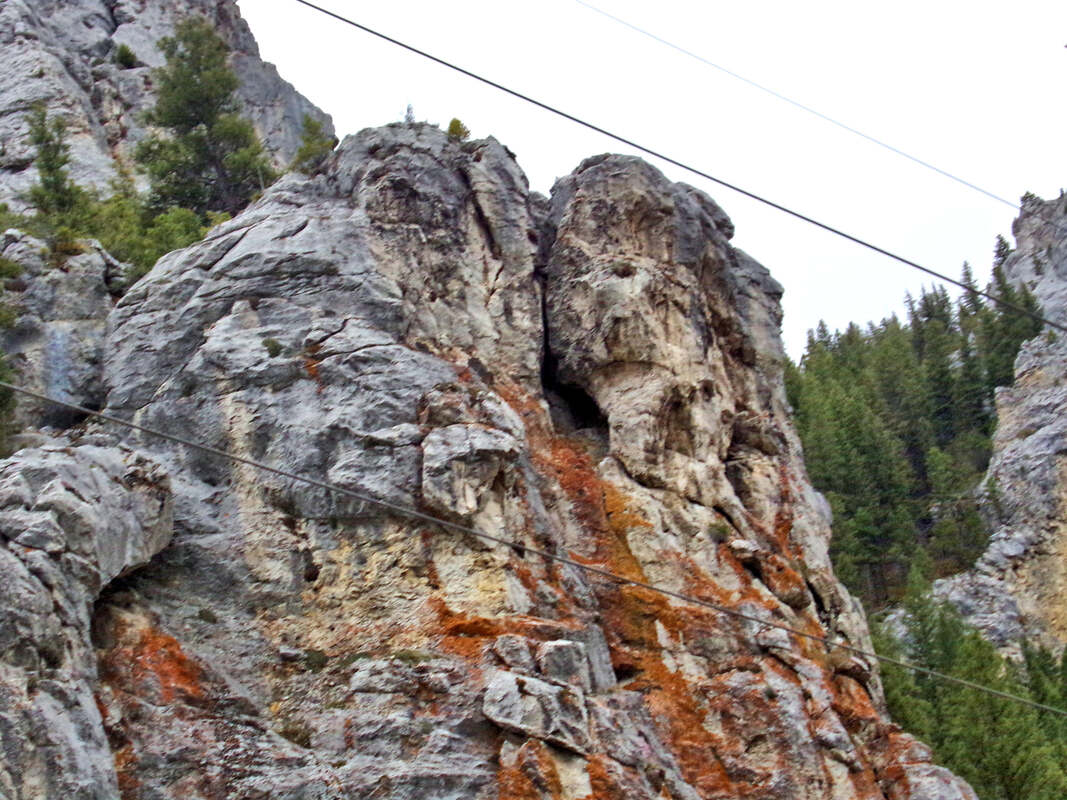 High up on the canyon wall of the Asgard Complex are Flash Fossilized Beings that appear to be similar to Freyja and Odin.

"Freya (Old Norse Freyja, “Lady”) is one of the preeminent goddesses in Norse mythology. She’s a member of the Vanir tribe of deities, but became an honorary member of the Aesir gods after the Aesir-Vanir War. Her husband, named Odr in late Old Norse literature, is certainly none other than Odin."

"Freya is famous for her fondness of love, fertility, beauty, and fine material possessions. Freya is the archetype of the völva, a professional or semiprofessional practitioner of seidr, the most organized form of Norse magic. It was she who first brought this art to the gods, and, by extension, to humans as well."
​
"Odin is the god of wisdom, poetry, death, divination, and magic in Norse mythology. Son of Borr and the giantess (jötunn) Bestla, Odin is the chief of the Æsir and king of Asgard." 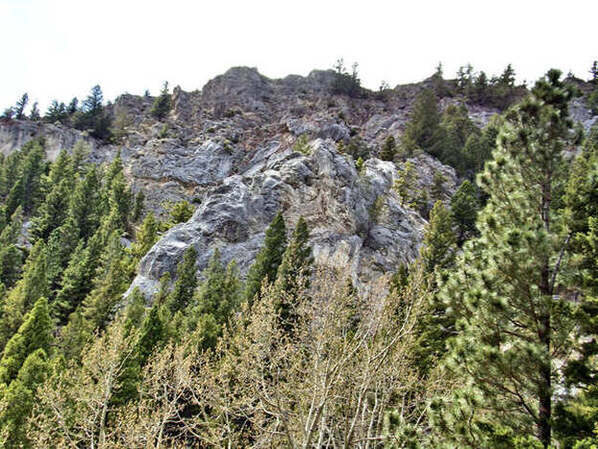 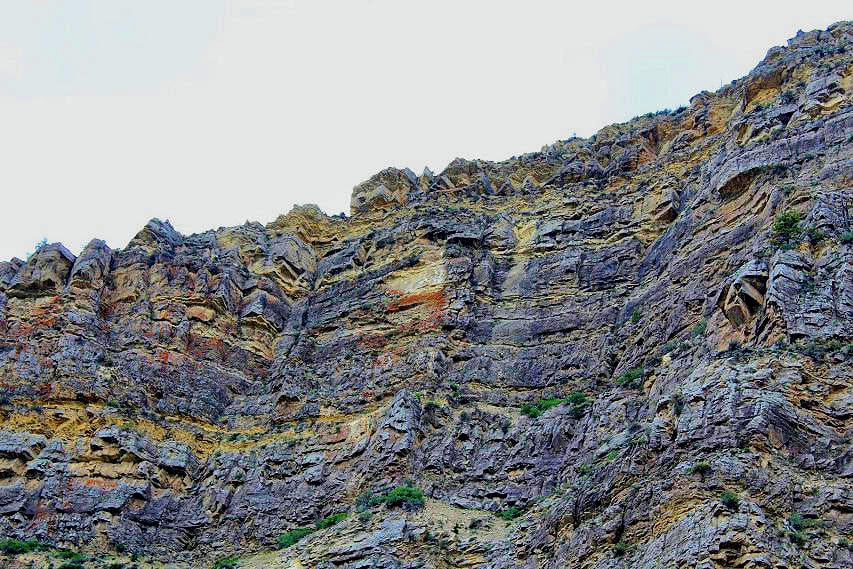 Tristan Saturn and Wolf Fenrir at Asgard Complex
Photograph by Tina Kinney Clarke
​
Displayed on a steep shale wall at Asgard Complex is the face of a wolf's head. The face is three dimensional featuring a left eye and a unique protruding 3-D symbol along the jaw.
Many of the features in Asgard are right out of the Norse Legends and so I have named this wolf Fenrir.
"A pair of wolves in Ragnarok, Fenrir was set to slay Odin. But the pair of wolves in Norse mythology was a symbol of Odin. Odin raised a pair of wolves named as Freki and Geri as his constant companions. Anywhere Odin went, the pair would accompany him. Odin even gave them all of his food."
https://bavipower.com/.../odin-symbol-best-viking-symbols...
​
Between the Wolf Fenrir and the ancient city of Midgard stands the Asgard Robot. Note the bionic left eye.
EAGLE MAN GUARD 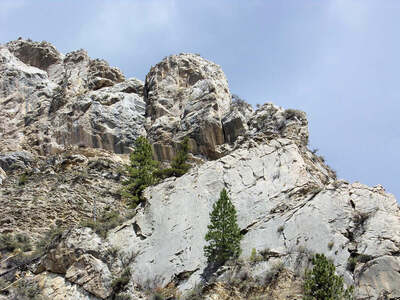 SPEAR OF ODIN AT HEAVEN GATE COMPLEX
​My latest theory that certain areas of the Montana Megaliths were one of the original Nordic/Norse/Viking ancient civilizations is gaining traction. I discovered the pictograph of the Spear of Odin in the year 2000 and have taken several Indigenous People to this sacred place since then.
​
Leon Secatero, Navajo Headman, gathered the Indigenous Elders from around the world to New Mexico in 1998, to write the calendars for the next 500 years. When Leon came to Montana in 2008, he read the petroglyhphs on the Shaman Rock and pointed out the star maps.

Leon interpreted several of the pictographs at Heaven's Gate including the Spear of Odin explaining that the Vikings were here in Montana in the far distant past. Leon stated that there is an underground tunnel system that connected the continents.
GATES OF THE MOUNTAINS COMPLEX

Cygnus the Swan at Gates of the Mountains Complex
​
Gates Helmet Head
MAGPIE COMPLEX
At the entry to Magpie Gulch another flash fossilized helmeted head is positioned to watch over the valley below. His face has deteriorated over the millennia however the shape and integrity of his helmet is consistent with several of the other helmeted figures at the Montana Megaliths, USA. 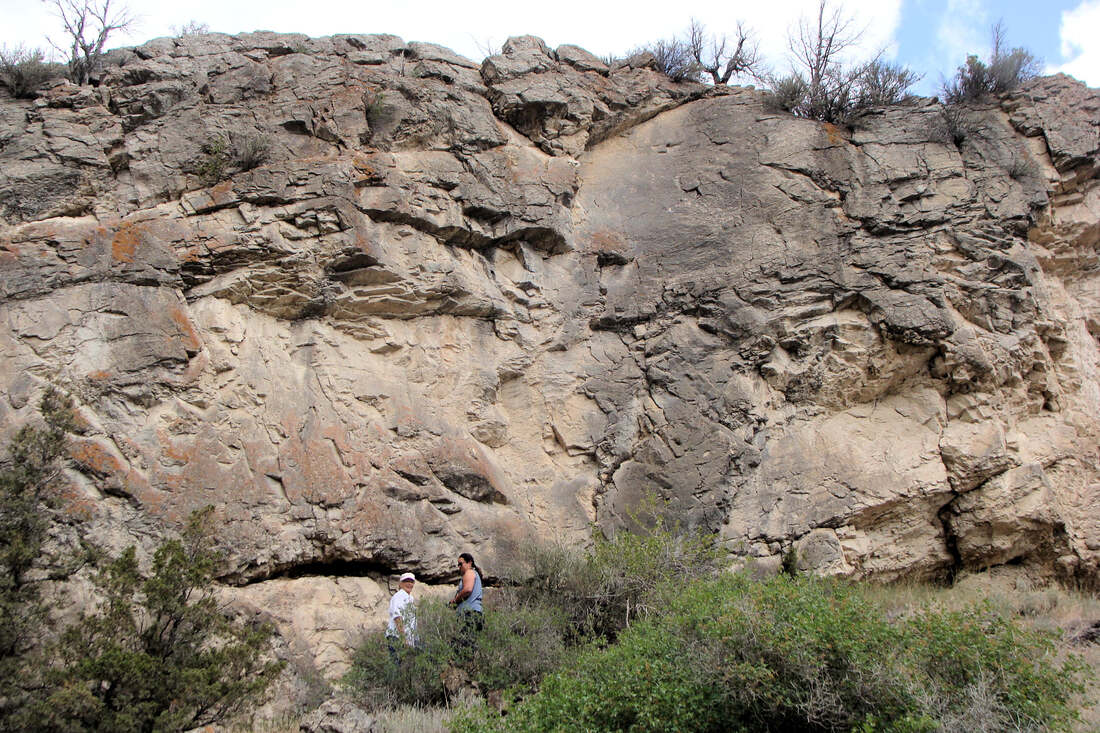 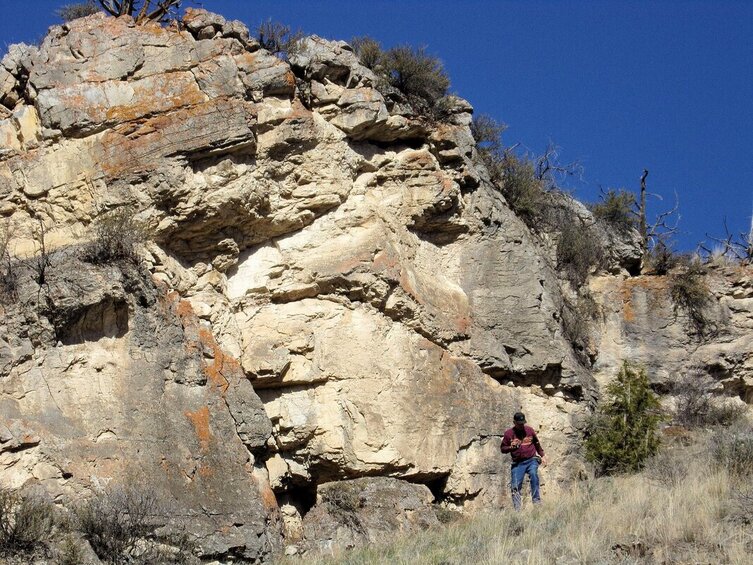 While exploring the Threshold Complex I first saw the head of a horse on the end of a wall. Then as I walked downstream I watched as the horse on the side morphed into a friendly dragon head. To my surprise I then was drawn to a free standing feminine human head positioned perpendicular to the main wall.

Under the chin of the horse and the dragon head there appeared to be a cave. A square black block was positioned to block the entrance.When he saw the photographs my husband, Bill Ryder, was curious and so we returned a few days later to explore the area.
THRESHOLD DRAGON TOOTH
Bill and Julie Ryder at Threshold Dragon Tooth
​ 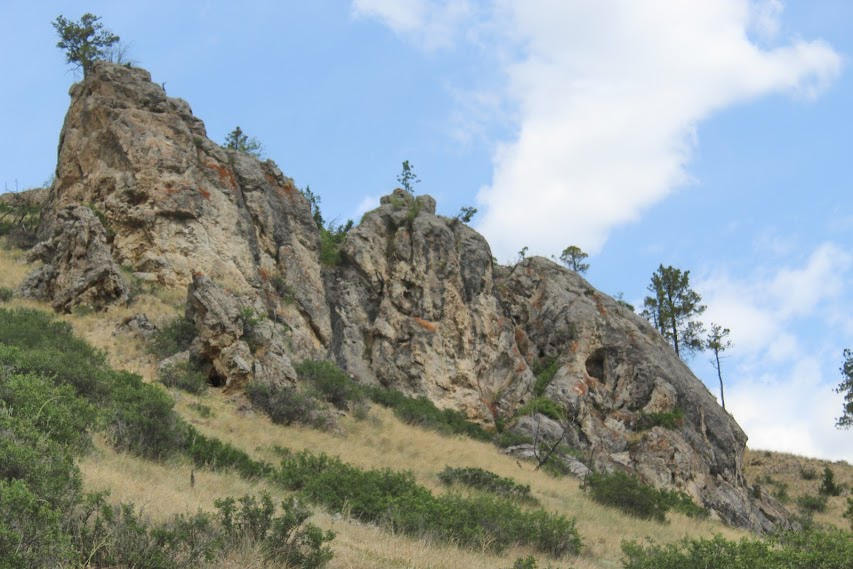 Triptych Dragon at Threshold Complex
Photograph by Tina Kinney Clarke
Giant human faces adorn three segments of the Triptych Dragon at Threshold Complex in the Montana Megaliths East. Discovered by Julie Ryder in the spring of 2021, Triptych Dragon lays alone on a hillside facing a valley the terminates at the Missouri River.
CAVE COMPLEX
I discovered Cave Complex below an active gold mining operation. I have returned at different times of the day in an attempt to catch the light just right. Above a roaring stream the cliffs are straight up with features on only one side of the canyon. There are several Flash Fossilized Beings however these were the most compelling.

The snout of a black Anubis type image emerges from a white stone portal.  His left eye is visible in the shadow.  Black and white stripe are evenly spaced on the right side of the Anubis mouth.
AVALANCHE COMPLEX 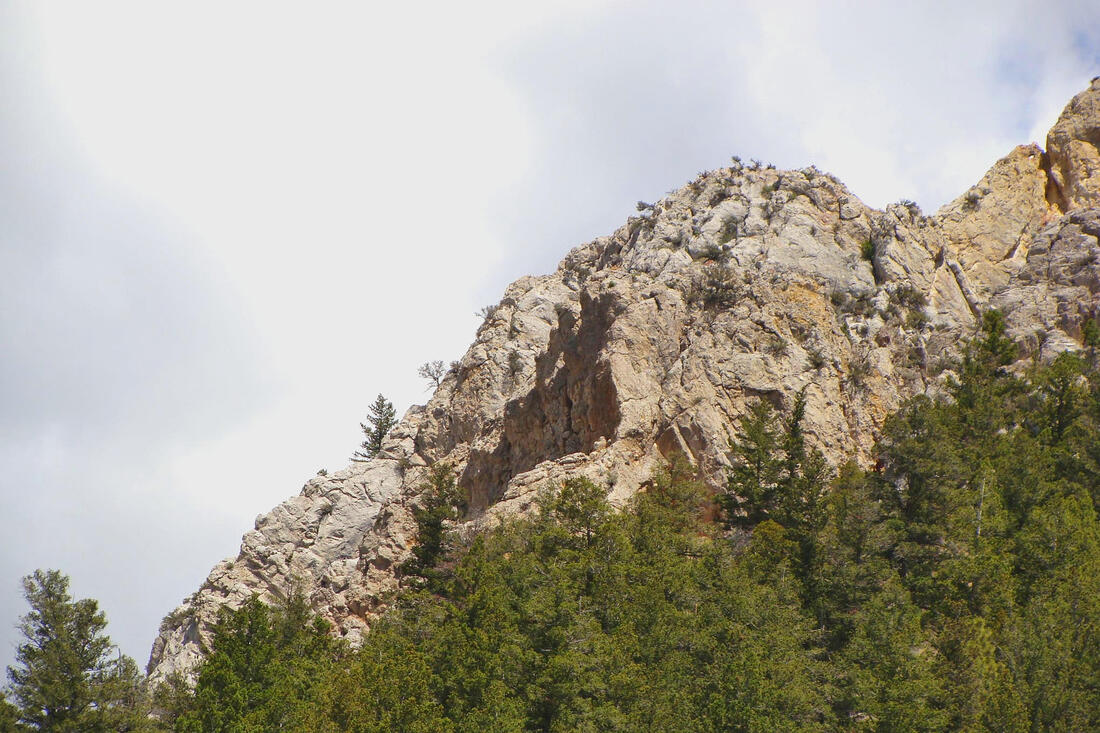 Dragon Malcolm was discovered on June 26, 2021 by Dawn Menning at the entrance to the Avalanche Complex.  Notice that the left eye of Dragon Malcolm is white with a black elliptical pupil inset into a recessed cavern.

As I slowly drove up the narrow canyon on a one lane very narrow road Dawn Menning and Rene Allery took several photos that they will be sharing. We have found several eyes of dragons and other large FF Beings whose eyes have become entrances to caves.
WHITE FACE PICTOGRAPH  SITE
Since my obsession with the very ancient world began a few years ago I have developed an acute "pattern recognition syndrome". Approaching the glyph site I noticed a white face that was facing true south. I named this feature White Face Monument. A silhouetted elongated head featuring the right eye follows the pattern of several of the Geosculptures, Mountain Figures, monuments and statues at the Montana Megaliths. Under the face are the pictographs painted in red ochre.
Michael Pell writes:
"We have a fish, horse and Thunderbird/Eagle/Phoenix.
Matches the constellation line up seen in this picture with Pisces to the bottom left, Pegasus in the bottom middle and Aquila to the bottom right. With White Face looking toward the City of Phoenix due south. That complex has astronomical implications in my opinion (with perhaps other things). it is just a guess but when the glyphs can translate to positional constellation placement in a vicinity of the sky adjacent to each other, that indicates a plausible sky reference perhaps for an annual period of importance when they were situated in view above."
Michael Pell sends a second graphic and then comments,
" Here is another quick diagram I made showing the linear connection between the location of the constellations that match the pictorial nature of the glyphs for consideration.
That they match may be by design rather than coincidence.
That they are located south here might reflect the direction to look as White Face observes during the Summer solstice."
​Montana Megaliths You Tube Channel:
https://www.youtube.com/channel/UCdFeIhHZdjebI7WPgN-guhQ​