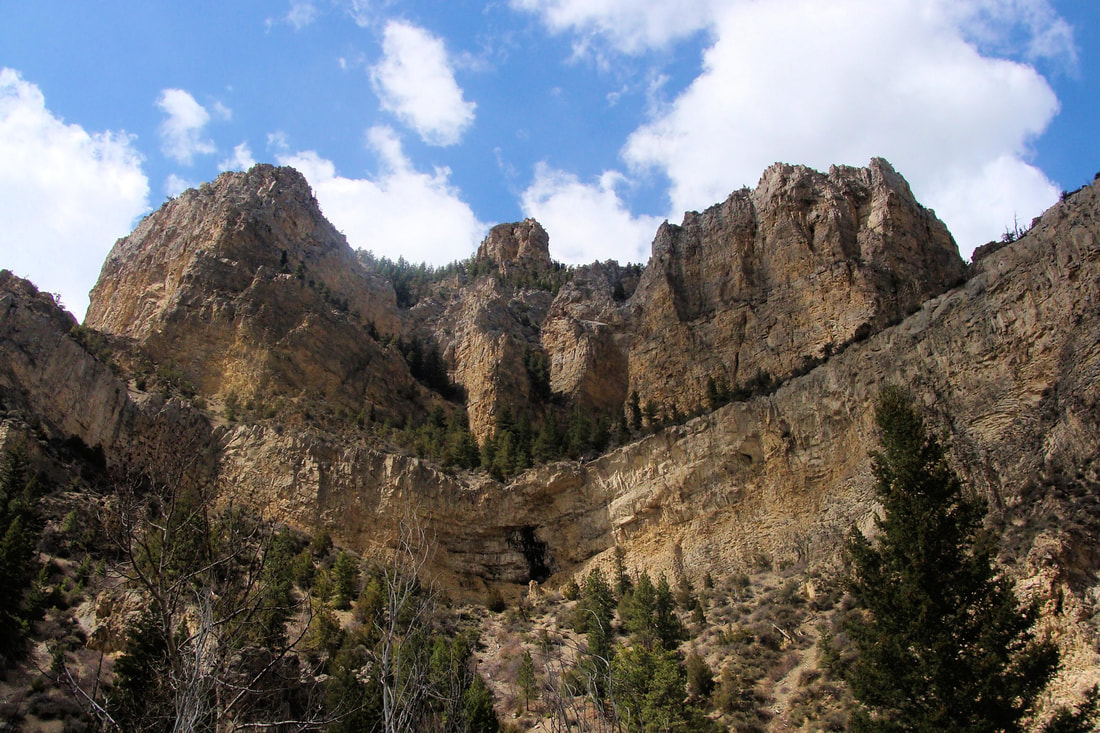 Click on MORE... at the top of each page to access a drop down box that will link
you to more pages of the Montana Megaliths

The Montana Megaliths were constructed by a series of advanced civilizations that inhabited North America in the far distant past. Some of the features are unique to a particular megalithic complex while other sites are a conglomerate of mixed intentional constructs.

My working theory at the moment is that the Epochs are not necessarily sequential however I am naming them according to the type of construction. Nothing is "set in stone" and most certainly will be revised with each new major discovery. Geopolymer was utilized throughout the Montana Megaliths and so I do not use this as a proof point of one specific epoch.

I coined the word Geosculpture in 2018 which describes the First Epoch when Creator Beings sculpted their own shapes into the landscape. I have proven that Geosculputres are predictive in the discovery of megalithic intentional construction inside and adjacent to the these landscape features. I published my discovery of Green Avian Geosculputre before I discovered Eagle Mount Monument there.

Andrew Barker's research, some of which has been verified by satellite deep geoscans here in Montana, was the basis of the Mountain Figure nomenclature. Mountain Figures are entire mountains that are shaped like human/hybrid beings that face the sky. Andrew tells us that there is often a chamber under the orbit of the eye. Mountain Figures were formed from natural mountains that were enhanced into specific shapes during the Second Epoch in my theoretical time frame.

For the Third Epoch I coined the name Monumental Epoch wherein humongous rocks and mountain sides were enhanced to form human/animal shapes that faced the horizon and/or point toward other megalithic sites such as pyramids, megalithic complexes or industrial hydraulic plants such as Geosquares and Geomarker.

Fourth Epoch was the Industrial Epoch... a time of building industrial type hydraulic plants
to mine gold and precious minerals.  Electromagnetic earth energy, torsion field, electrogravidic and crystal technology provided the energy source to construct walls to channel water.   Pyramids and  dolmens were constructed to produce, transfer and store energy.

In the Fifth Epoch statues of icons were carved or molded out of geopolymer. Temples were constructed.  Older buildings were converted into religious centers.


We believe that the Montana Megaliths have not been refurbished in at least the last 12,800 years since the Younger Dryas Event as no advanced civilizations inhabited this area according to the mainstream narrative. 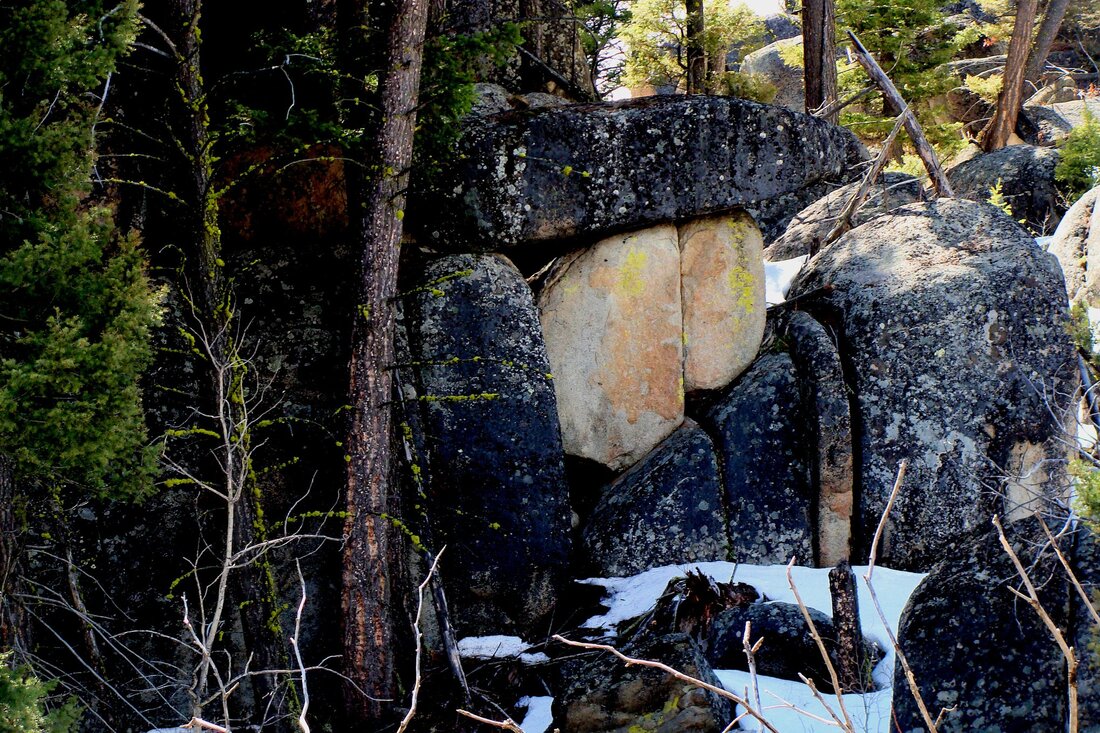 The geomural on the surface of the Pink Vault matches a map of
​Pangaea before the continents split apart.
FIRST EPOCH: GEOSCULPTURES
Instead of beginning at this moment in our current timeline and attempting to trace the numerous civilizations that inhabited North America backwards let us begin with the premise that the Montana Megaliths were built by the first...the very first...inhabitants of Earth. Between cycles of cataclysmic events civilizations were built and destroyed over and over again creating layers of ruins that demonstrate different levels of technology.

As cycles of mass destruction events occurred over epochs of time, separating the land mass as well as the populations, the cultural and religious symbols of the Mother Root Race were spread far and wide. Lands were explored, invaded and conquered over and over creating a diffuse mixture of languages, iconography, art and symbols.
​
I have discovered a wide variety of artifacts, statues, and art at the Montana Megaliths that represent several different current world wide cultures. Some artifacts are a total enigma. ​
​Late one night while searching on Google Earth I found Olmec Helmet Head Geosculpture right next to a major Montana Megalith site that had been verified by satellite deep geoscan. The ear flap that is consistent in the Olmec Sculptures in Mexico is also pronounced in the landscape on the Olmec Helmet Head Geoslculpture here in Montana.

Olmec Helmet Head Geosculpture is very similar to the La Venta Olmec Head sculpture found in the Yucatan in Mexico.
​
Ram Nodia Geosculpture, positioned high above the Missouri River, looks down over several intentionally constructed megalithic features in this section of the Nodia Megacomplex. As seen from Google Earth the complete head and body of Ram Nodia Geosculpture covers just over three square miles.

Second Epoch: Mountain Figures
The Creator Beings sculpted their faces and the faces of their icons into the mountains so that they would be remembered forever.

Nefer Sleeping Goddess and Tut Mountain Figures
Andrew Barker wrote "We are seeing these features throughout the World. If that is not enough the Mountain Figures align with other megalithic features. Now we need to get serious about what this means. The core point is this, creatively we see a likeness in something that is tens of thousands of years old. When you see the likeness and it aligns with four or more other critical points and satellite technology is being used to check for where man has enhanced an image then we are onto something else. As each alignment point, each aligned megalith, each scan tells us man has enhanced the landscape for spiritual purposes."
​
We are just beginning to explore this unimaginable possibility. In the beginning...when the Ancient Builder Race created humans in their own image perhaps they also carved their own face and body silhouettes into mountains. Sometime in the distant past advanced civilizations built dolmens, standing stones and astrological calendar stones to align with these mountains.

Mountain Figures are defined as recognizable sculptured human like figures that usually face the sky or figures that occupy an entire mountain side. Sky facing figures appear in silhouette on one side only while entire mountain figures appear face forward .
THIRD EPOCH: MONUMENTAL
Features from the Monumental Epoch are defined as cyclopean stone sculptures that face the horizon.  On close inspection of  these monumental figures the base cyclopean rectangular block construction is apparent. Granite monuments are more clearly defined as granite is much harder than limestone which fractures and disintegrates more readily. 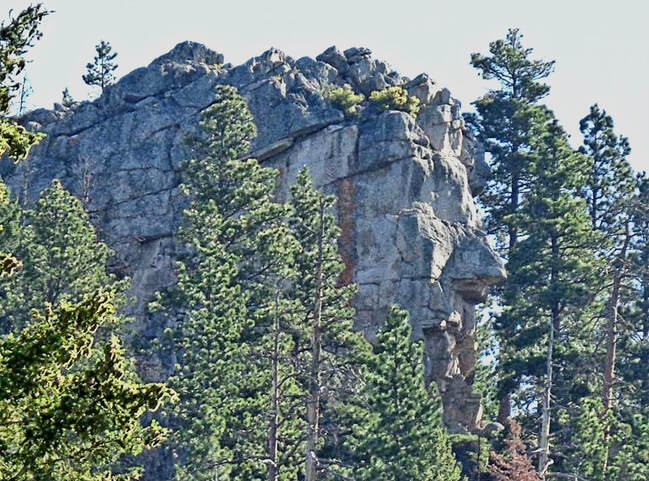 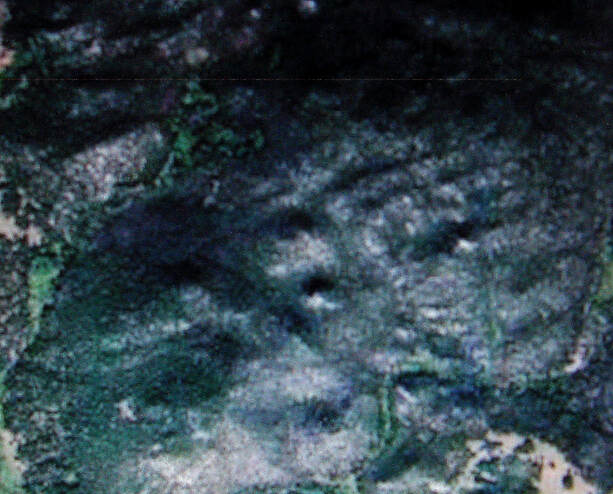 Geosquares was an industrial plant complete with canals, ramps to control water flow and
​step pyramids to produce power.
Cyclopean masonry refers to huge blocks of stone stacked up to create walls and buildings
"The term comes from the belief of classical Greeks that only the mythical Cyclopes had the strength to move the enormous boulders that made up the walls of Mycenae and Tiryns." Wiki 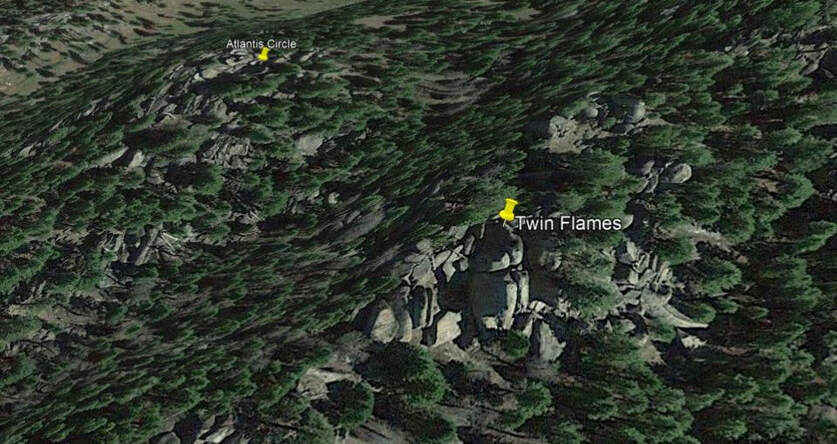 Twin Flames Duolith as seen from Google Earth
Satellite geoscans have identified the largest standing stone block in the world is at the Montana Megaliths and it is still standing.  Coated with geopolymer composed of minerals that are not from the immediate area Twin Flames Duolith is surrounded by a stone wall.
Weighing in at over 5,300 tons, cut into a bedrock cradle, and standing over 110 feet above the surface Twin Flames Duolith is located inside the Mysterious Eye Geosculpture.
Fifth Epoch: Religious Icons
Denisovan Legacy
The Montana Megaliths demonstrate different epochs from the beginning of civilizations on Planet Earth until the Younger Dryas, 12,800 years ago. Denisovan related correlations fill in the 45,000 year ago timeline, give or take a few ten thousand years.
​
FIRST HUMANS TO ARRIVE IN NORTH AMERICA:
THE DENISOVANS 130,000 YEARS AGO
http://the-wanderling.com/cerutti.html
​
Denisovans - were they the gods of the ancient world?
http://www.sydhav.no/giants/denisovan_ancient_gods.htm?fbclid=IwAR2ZamYnb4aKrNUAfz3wnaejipt7jHOeZ_MvL9HQBj1IN1eUeAtbwkX1yDQ

​Meet the Denisovans | The True Founders of a Lost Civilization | Andrew Collins
https://www.youtube.com/watch?v=F5gQIJ2IJLI
​
​The humongous granite T- block high above Sage Wall is much larger than the T shaped pillars at Gobekli Tepe. Several large crystals were discovered in the area.
Bennu Birdman in the MM relates to the Egyptian Bennu Bird which "transports the Soul of Ra to the higher realms" in Egyptian traditions.
Collins has written books about the Cygnus Constellation connections with Egypt and Gobekli Tepe which he relates to the Denisovan Legacy. The Cygnus Swan image attached to the side of Castle Cosmos in the MM as well as the multiple eagle images at the MM correlate to the constellations of Cygnus and Aquila.

Andrew Collins: The Cygnus Key - The Denisovan Legacy, Göbekli Tepe, and the Birth of Egypt
https://www.youtube.com/watch?v=xCs4QKa3alc
Silver Skull
Christopher Tims on top of the Silver Skull
The Silver Skull was discovered by Julie Ryder in the Spring of 2017.  From the towers at Daniel's Destiny Complex one can look down upon the Silver Skull.0
​
​The Cranium Coronal Suture is obvious on the left side of the Silver Skull.
​
Elongated head giant skeletons have been found that have two rows of teeth just like the granite Silver Skull at the Montana Megaliths.
​
"Hooton, Dixon and others agree that the first immigrants to the New World were dolichocephals.  Even in the late 1800's it was clear that elongated skulls, or dolichocephalic people were once numerous in North America."
American Anthropologist, Volume 38, Issue 3, (1936), AN OUTLINE OF THE PROBLEM OF MAN’S ANTIQUITY IN NORTH AMERICA By EDGAR B. HOWARD , page 396 (as pdf) 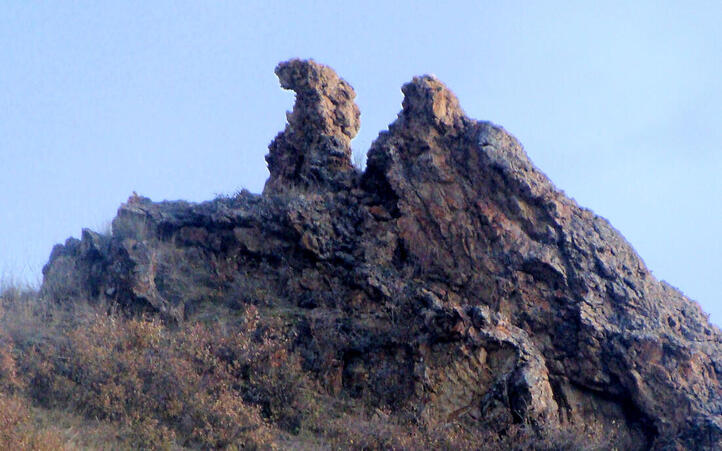 Andrew Barker writes:  "This looks to me like the snake with a dove motif. Doves are really significant. Paloma (dove) comes up time and again in the most important Megalithic sites in Spain. One sign is ‘a crossing point’. The snake/serpent obviously has massive significance.  Also note the head behind head form. Think of Egypt where this positioning was constantly used. "
STONE LOVERS CONVERSATIONS​
My initial interpretation of Serpent and Dove was of two lovers having a conversation. The head dress on the female figure is very similar to the Medicine Hat Geosculptue which is in
Canada and is aligned with the Montana Megaliths.  The male figure reminded me of a marble sculpture depicting a reclining bearded river god or Oceanus. Capitoline Museums in  Rome. Italy

Every once in a long while I see an image that could incubate a long winter's night dream. What do you think these lovers were saying to each other?
FEATURING HUMANOID EVIDENCE
Although mainstream scientists say that we are currently in the Holocene Epoch (11,700 years ago until the present), there is a growing movement that argues we entered a new epoch in 1950. The Anthropocene Epoch is denoted by the collective activities of human beings that alter the earth surface.

So how do we account for the ancient, extensive and intentional altering of the earth surfaces as evidenced by the Montana Megaliths?  How do we account for the fact that ancient similar stone structures, art and cities are found all over the world and under the oceans? When I present photographs of the MM to people at first there is a stunned silence followed by the same questions: Who?...What?...Where?...When? and Why?

Humanoid characteristics are mixed in among Avian/Aquatic/Animal/Human Hybrids featured in geosculptures, statues, glyphs, high bas reliefs, etchings, mountain figures and monuments here in Montana and at similar sites all over the world.

Shown here are a few of the parts and pieces of humanoid-like features at the Montana Megaliths, USA.
White Amorphous Beings have been sculpted in the front facade of temple like structures miles part from each other.
​
​​More Montana Megaliths​ on the Galacticfacets website:
https://www.galacticfacets.com/