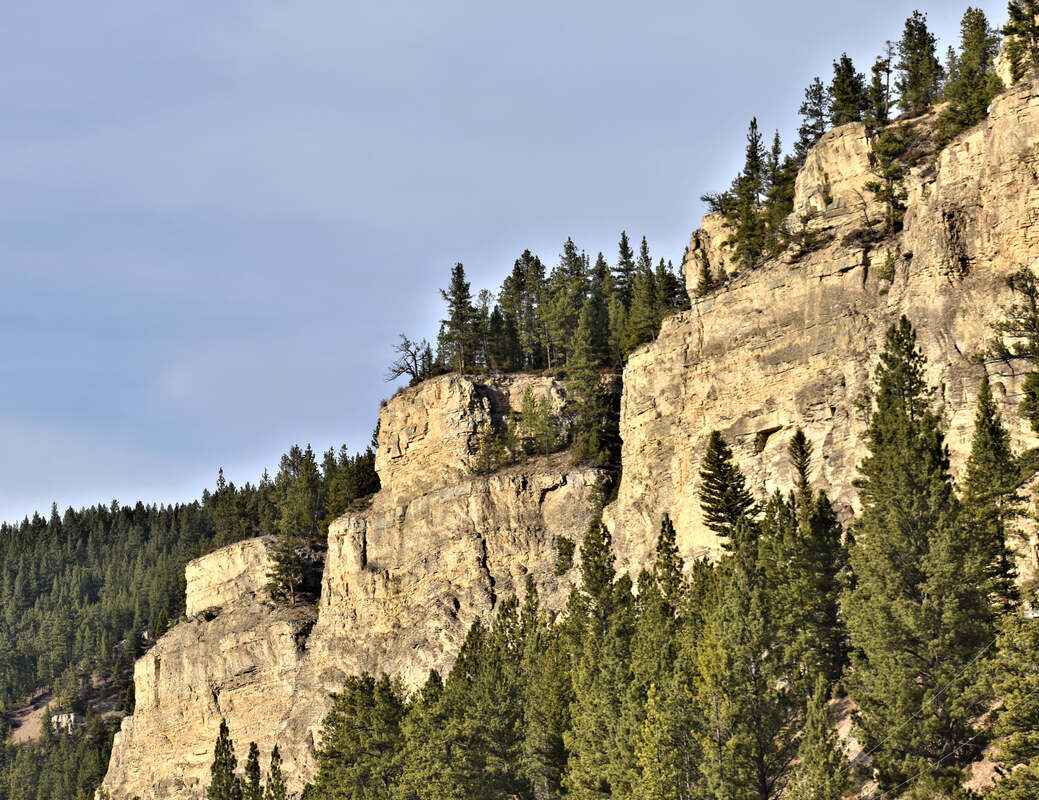 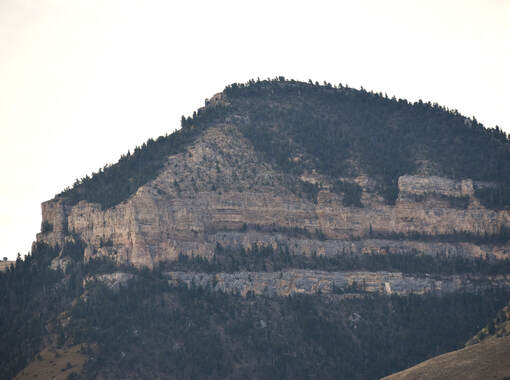 Early on a misty morning Bill and I were heading west out of Cody, Wyoming toward the east entrance to Yellowstone National Park. When we travel I am always on the look out for intentionally constructed ancient buildings and cyclopean walls especially along the banks of rivers and lakes. There it was.

A large perfectly shaped rectangular edifice with sharp 90 degree corners and a symmetrical sloping top section that forms a triangle on the side, just like the roof line of a modern building, caught my eye. This large edifice had been intentionally constructed above a river that is currently named the Shoshone River.
Flat side walls, vertical seams, 90 degree angle cut blocks that are horizontally aligned are proof points of intentional ancient construction. Terraced support walls with a consistent flat top surround the edifice. 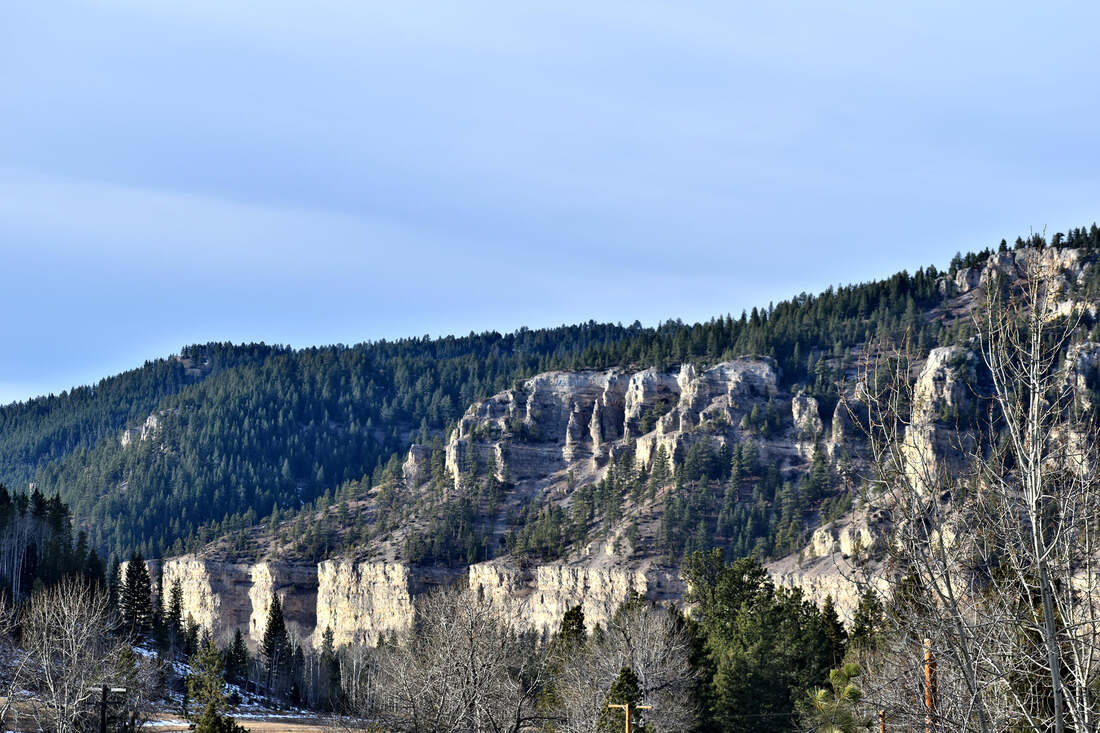 Monarch Complex is a three tiered massive edifice supported by a straight aligned cyclopean block base wall.  Rectangular fitted blocks with 90 degree edges are stacked up with a perfectly flat top.   The second terrace is contained within the parameters of the base wall and is filled with smooth curved structures.  Near the top is a third layer. On the right side a huge monolith rises out of the base wall and towers above the second terrace.
Geosculptures at Monarch Complex

Elfin Monarch Geosculpture
​Elfin Monarch Geosculpture features a sparkling right eye with a circular black pupil.  Rondelle shaped right ear is reminiscent of  the Lady of Elche and of Tartessia de Montana, a statue in Giant's Playground Complex.  A button nose and a green elf hat and cape compete the image. On the right side of the nose is the village of Monarch. 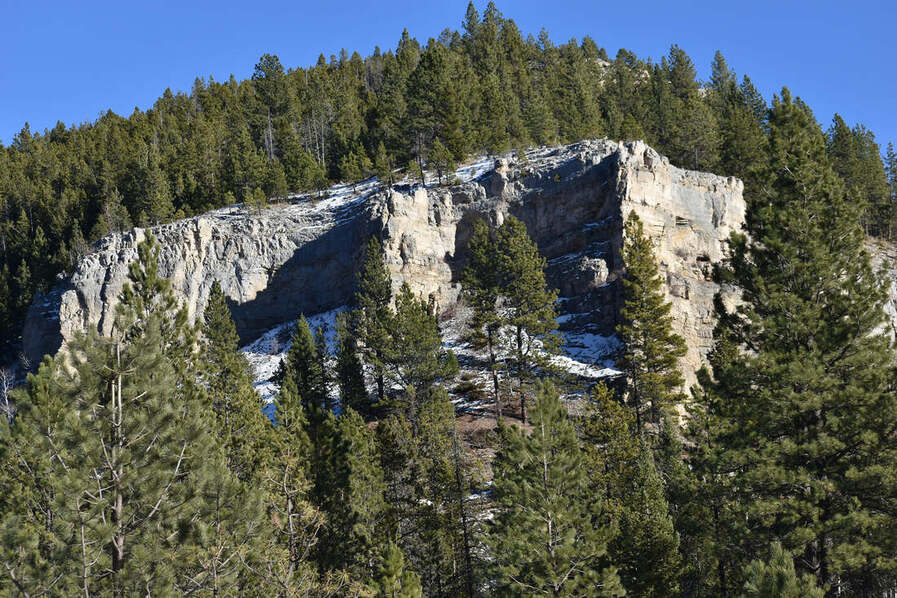 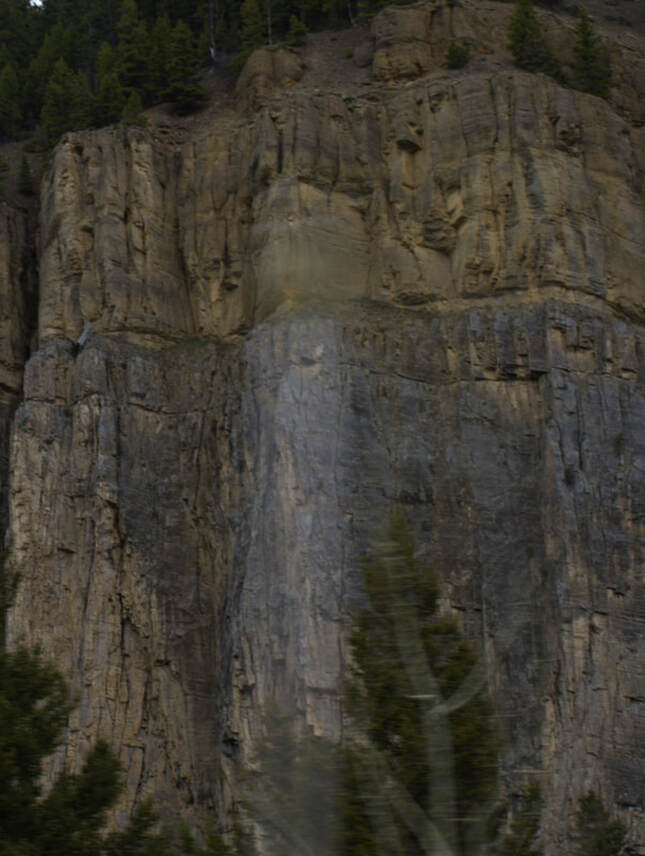 Gallatin Spirit Being Appears
This Spirit Being appeared above us on our first visit to Gallatin.  She appears to have wings.
Once we began to see the Flash Fossilized Beings and wrapped our minds around the enormous possibilities that these figures were actually biological living entities in the far distant past, we continue to find evidence of ancient civilizations in the mountainous areas all around us.

It feels as if the Ancestors are guiding us even when we get lost or take the "wrong road". When the Spirit Beings appear we know we are time traveling into alternate dimensions. Sometimes they show on camera just to assure us that the experience was also real in 3-D consensus reality.
Gallatin Lion Sphinx gazes across the Gallatin River
​
Above the Gallatin River we discovered ancient terraces covered with flash fossilized images of human/aquatic/avian/draconian Hybrid Beings. The images in the Gallatin Pantheon are very similar to the hundreds of varied hybrid beings that are found throughout the Montana Megaliths however this is the largest and most concentrated site so far.

The structure of the terraces are similar to the Monarch Complex however there are far more faces on the Gallatin Gateway Terraces. 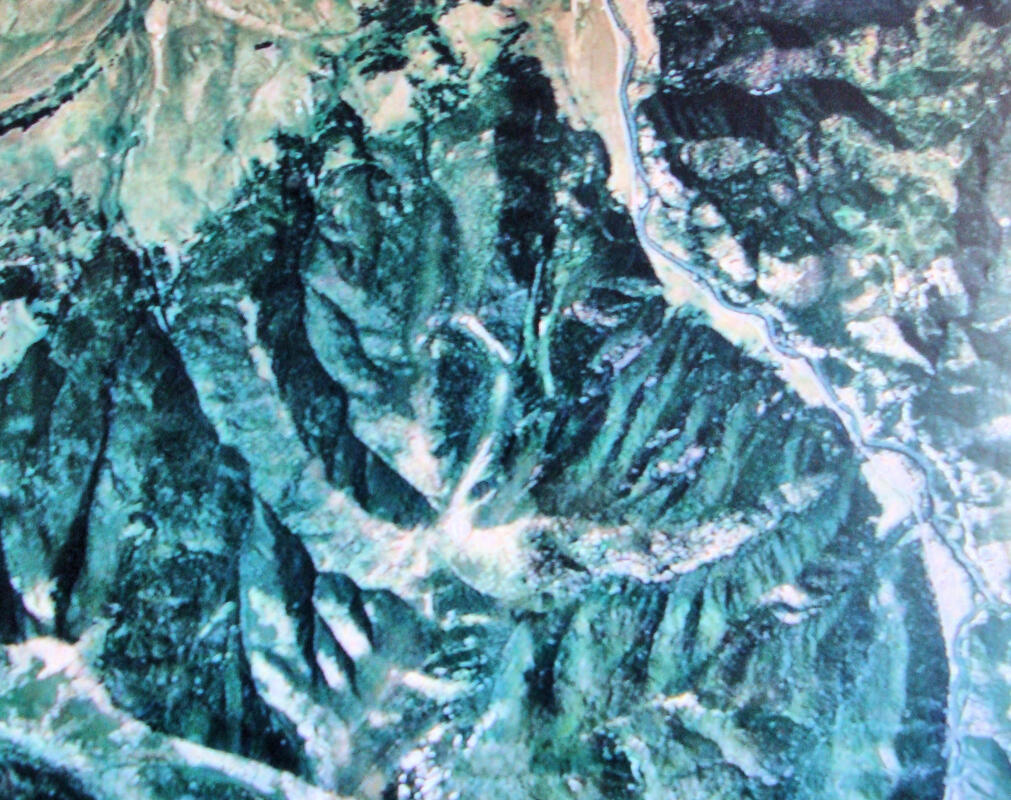 COUGAR TITAN GEOSCULPTURE
Google Earth
As seen from Google Earth, the Cougar Titan Geosculture covers several mountain ridges.  I named him Cougar because his cat like right eye has a black circular pupil and his left eye is covered with a lightning bolt symbol.  More human features include high cheek bones, nose and chin.  He appears to be wearing a robe and a prominent chain like necklace.

From head to waist Cougar Titan measures approximately 9 miles. Then the Titan body disappears from view behind the mountain ridge above the village of Big Sky, Montana.
​ 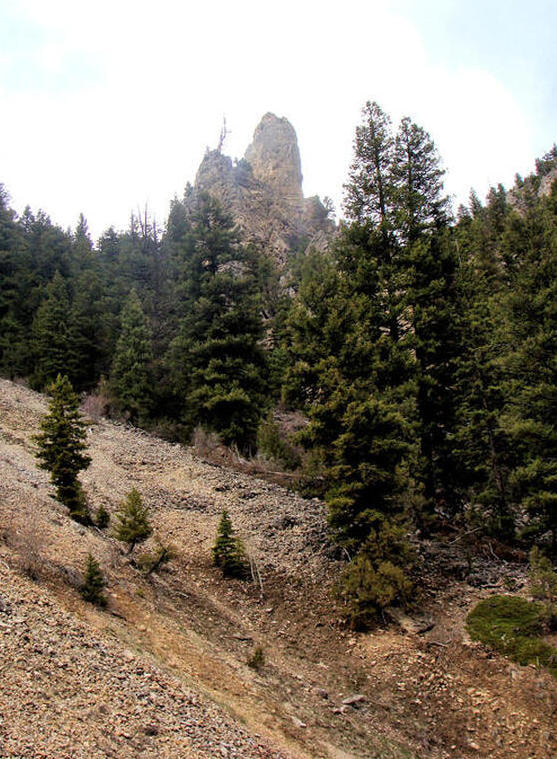 Rising high above a flowing stream that eventually flows into the Gallatin River, the Flash Fossilized Storm Castle Titan is still grinning after all these years. Two rows of top teeth are still intact although it appears that his mouth and lower jaw may have slipped down the mountain a bit. Both black beady eyes are present. Broad shoulders and both arms are still intact.
Discovered on May 19, 2022 by Bill and Julie Ryder
​
Titans posted by Sib Sibby on #TheRocksWereAlive FB group site
​
https://www.facebook.com/groups/213979952672927/permalink/1244666849604227
Gallatin Helmet Head
​ 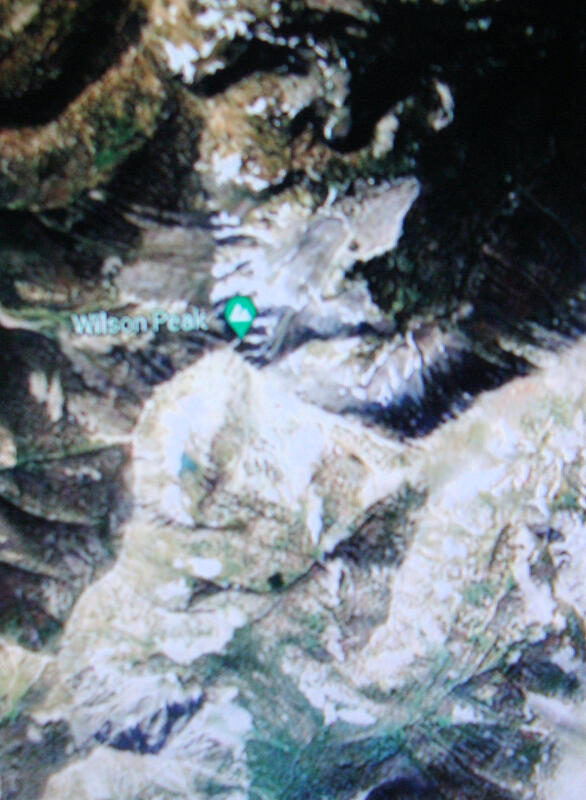 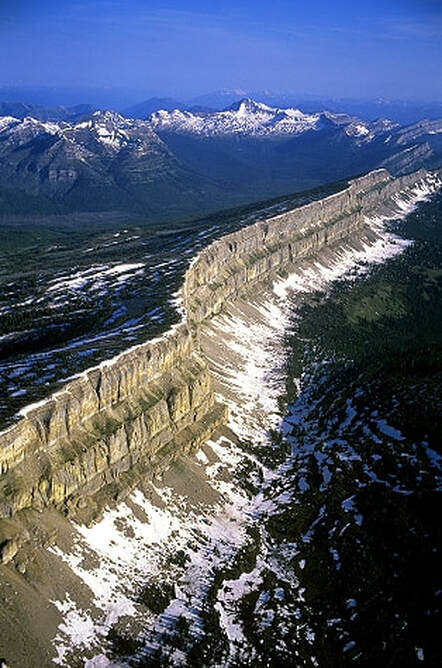 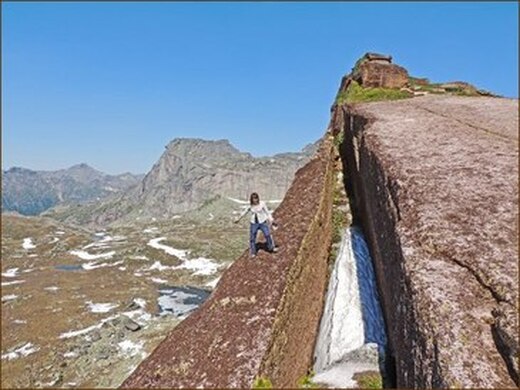 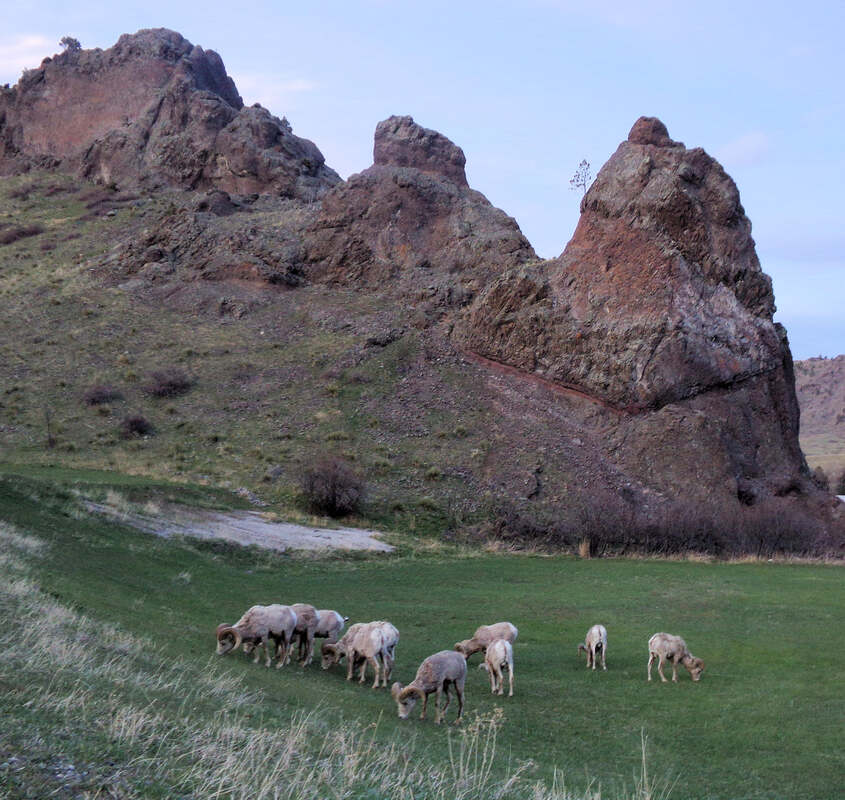 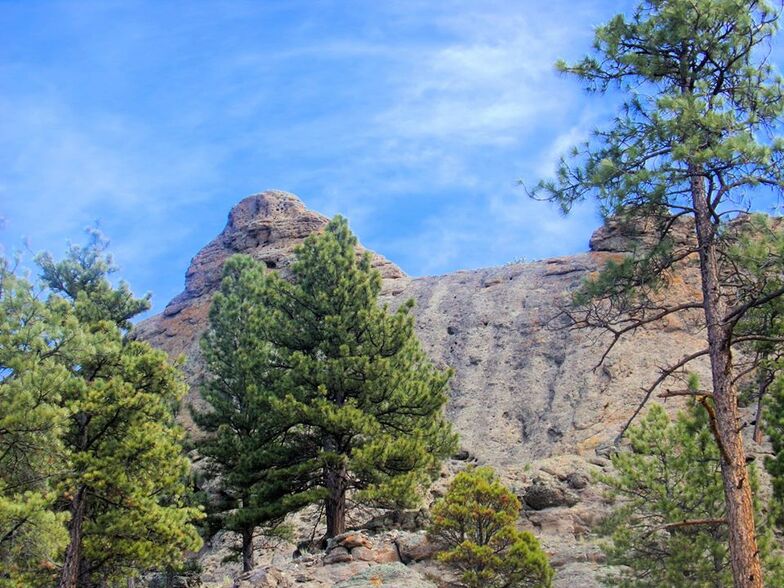 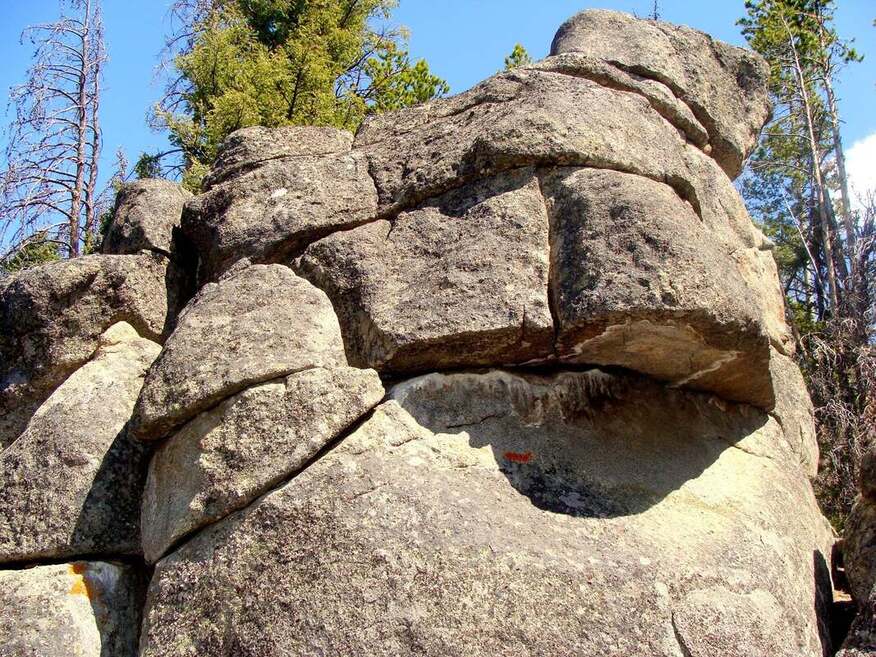 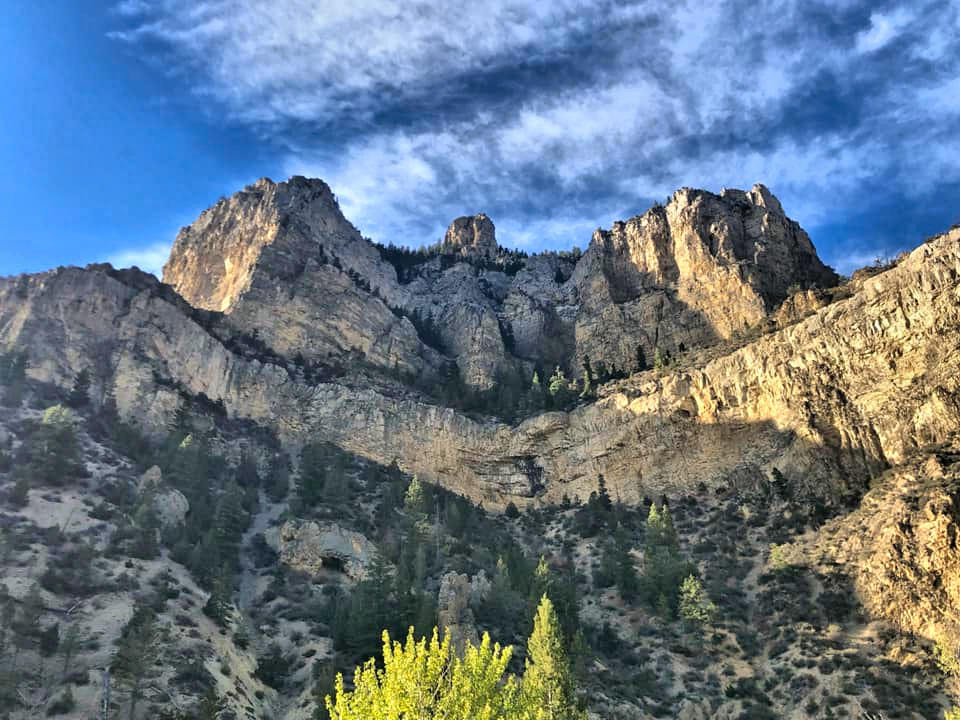