Click on the word "MORE​" at the top of each page to access a drop down box that will
link you to more pages of the Montana Megaliths.
Please contribute to our ongoing research and YouTube Production
Join us on Patreon:
https://www.patreon.com/montanamegalithsusa

MONTANA MEGALITHS HELMET HEADS
Olmec Helmet Head Geosculptue covers one square mile as seen from Google Earth.  La Venta Olmec Head in Mexico is a close match.
​
MEGALITHS IN JAPAN MATCH THE
​MONTANA MEGALITHS
Andrew Barker messaged me with a link to photos of megalithic sites in Japan found on a Facebook Site called Mysteriosa ASIA. Andrew noted the similarities to the Montana Megaliths, USA and his observations that the sites in Japan had been "cleaned up". In 2017, after visiting the MM, Andrew wrote, "The core difference with most sites in the world is this is pure, untouched and raw. The surrounding environmental chaos (of tens of thousands of years) has to be separated when reviewing a target dolmen. Scanning helps; but many are on rock bases. So we needed to establish criteria for dolmen classification and mark the target accordingly."

Andrew Barker commented regarding the Japan megaliths: "Once Montana is cleared back of thousands of years of natural environment, so the similarities will be clearer. The wonder is “how can a site in Japan be so similar to a site in the USA?”. This is the burning question and great researchers are constantly telling us “Sites in Japan and N America are part of one global forgotten civilization”. Perhaps these sites are yet another proof point of one sacred set of beliefs?"

"Cyclopean blocks carrying a sacred rope (or "Shimenawa") mark in these sacred spaces Milestones or Axes of reliance with Forces binding visible and invisible." (1)
"They can also be Sanctuaries high in the Heavens, because often chosen oriented on the big celestial events giving an account by a crack in the rock or by a particular angle of sight of a constellation or the Sun showing itself only at particular moments liturgical calendars (such as Solstices &
Equinoxes)."(1)
"I have listed several hundred of these "Kami ishi" ("stones of the Spirits") from this nature symbolically reinvested by men and henceforth included in pilgrimages or subjugations." (1)
1. Mysteriosa ASIA link:
https://www.facebook.com/…/a.107514207380…/133975421401224/…
CASTLE TURTLE
Montana Megaliths in Montana, USA
Towering shaped stones in the Castle Mountains can be seen from the distance however at this juncture in time there is not access to get close enough to examine them.
In the foothills below I discovered Castle Turtle which looks like a cross between a turtle and a armadillo. Talk about perfectly inset polygonal stone work.

An ancient armadillo the size of a car was discovered in Argentina.
http://www.geologyin.com/2020/02/ancient-armadillo-size-of-car.html
EARTH ENERGY GRIDS 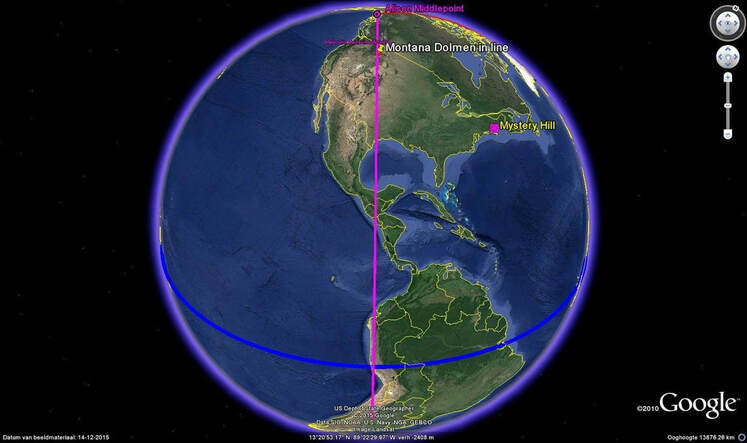 We are just beginning to recognize how much knowledge, inspiration and insights we hold in common with each other while at the same time maintaining a unique perspective. My discovery and obsession with the Montana Megaliths was inspired by the patterns I found on maps of the earth energy grid lines.

I dreamed about a complete world map...every energy vortex point, pyramid, temple, megalith, stone circle, petroglyph site, as well as the vast constructs under the surface appeared in holographic form on a spinning globe.  Bringing the vision across the veil into full waking consciousness is the greatest challenge. My dreams are often an assignment for the next mission and more often than not the briefings and instructions are enigmatic.
We, together, can bring this dream of a spinning earth energy globe into this reality and give this knowledge as a gift of inspiration to the world.....the world wide web connected by earth energy grid lines completely filled in.

My skill set is dreaming the dream into reality and networking with others who do possess the knowledge and skills to create this world wide map and fill it in with every megalithic site as they are discovered.

Michael Pell is a genius at the unique skill of correlating ancient symbols with astrological alignments.  He has figured out several astroarchaeological features and correlations in the Montana Megaliths, USA. Michael's detailed graphics makes it easy to understand the bottom line even if we all cannot follow the mathematical and astronomy details which led to his theoretical conclusions.
RYDER LINE 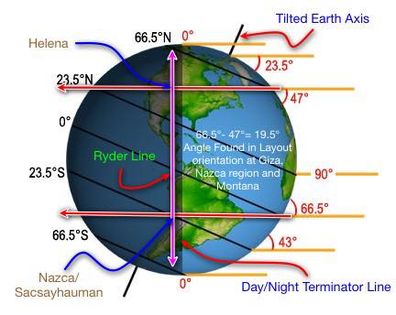 Michael Pell writes:
Speaking of math and possible correlations, when we consider the 13.141° latitudinal difference between the City of Phoenix and Helena to the due north of it, likewise when we subtract 13.141° from the Phoenix city latitude of 33° it results at 19.8°n latitude.
19.8 is very close to 19.5. A number we have seen often in constructed angles of ancient structures. In addition to 19.5 the value 19.3 is also part of that “leeway” and when we account for axial tilt sway over time between 22.1° and 24.5° (currently at a 23.3/23.4° angle moving toward 22.1 minimum) allows for wiggle room.
​
19.5° is definitely SOLAR RELATED based on Sun ray intensity and results from calculations involving Arctic/Antarctic circles, tropics of Capricorn and Cancer, etc.
For example; The Arctic and Antarctic Circle of 66.5° minus 19.5° = 47°. The latitude of Helena rounded up. My belief is Helena was selected to it’s latitude based on solar data as a result (as with other global locations).

This diagram (above) shows the connection for folks new to your page;
Those key latitudinal lines are based on the Sun’s rays as applied to the tilted Earth and as we know the Sun is a key time keeping element as to one of it’s purposes as experienced by the people on it’s surface.
​ 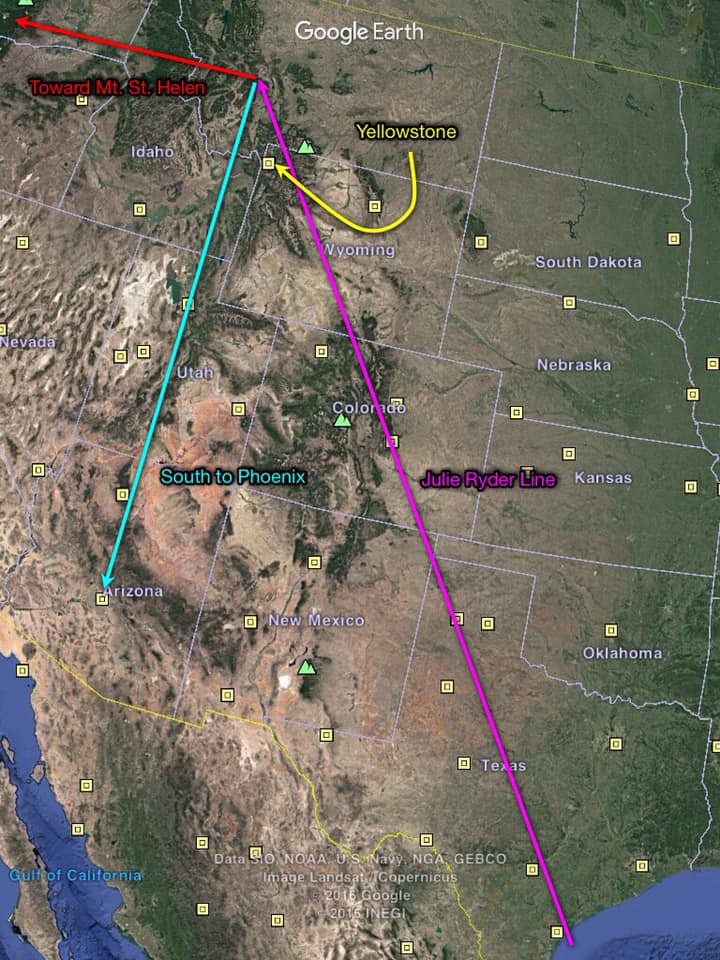 Illustration of a segment of the Ryder Line crossing the USA by Michael Pell
Michael Pell writes, More evidence that the Helena region was specifically selected as a site of megalithic development based on solar considerations. With the continents of North and South America facing a theoretical cardinal point side view, when drawing a line between known solar based lines between the Tropics of Cancer at 23.5° north latitude and the Arctic circle at 66.5° north latitude the centre of the line on the globe face is in the Helena/Yellowstone region.
​
Working in conjunction with the so called ancient equator and Ryder line (named after Bill and Julie Ryder) that matches another solar based line called the terminator line (the line between day and night) is it a coincidence that they bisect each other at Helena?
Is it the driving factor behind why the megaliths where developed here? 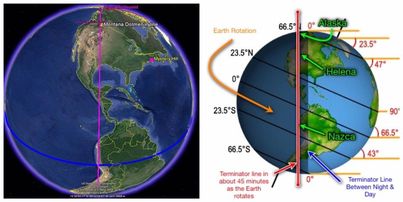