​Click on MORE... at the top of each page to access a drop down box that will link
you to more pages of the Montana Megaliths

​Julie Ryder's Facebook
https://www.facebook.com/julie.ryder.5095
An extensive satellite deep geoscan project has confirmed vast and extremely ancient megalithic structures both above the surface and underground at the Montana Megaliths in the USA.  This was an ancient metropolis that was built and re-built over epochs of time.

In the beginning the Creator Beings sculpted the faces into the landscape as evidenced by the four geosculptures I have discovered on Google Earth and verified on site in the Montana Megaliths.  Ancient structures are evident inside and around these magnificent human/avian/aquatic hybrid three-dimensional faces.  Mountain Figures that face the sky,  humongous stone carved monuments that face the horizon,  cyclopean walls, dolmens, rectangular buildings, statues and stone circle calendars are aligned forming geometric patterns on the landscape.

In reality there is a growing body of evidence that the Montana Megaliths, USA was the Mother Civilization as there are five geosculptures here that align with a sixth one above us in Canada. We know that the older the culture the larger and more sophisticated the architectural technology.. The largest standing stone constructed block in the world...5,300 tons is here constructed from stone that is not indigenous to the area. We have the tallest dolmen in the world...83 feet above ground level.

​There are humongous walls like in Gornaya Shoria Russia, statues of what became the Egyptian Bird Gods, a stone statue of a Robot and an ancient Buddha reminiscent of Angkor Wat. There is even a geomural that is a perfect map of Pangaea. There is a mountain carved into an Eagle that is 150 stories high and we can prove that it was intentionally constructed. I have discovered and documented 79 sites ranging over 150 miles in the last seven years. Satellite deep geoscans have confirmed layers of under the surface intentional megalithic construction. 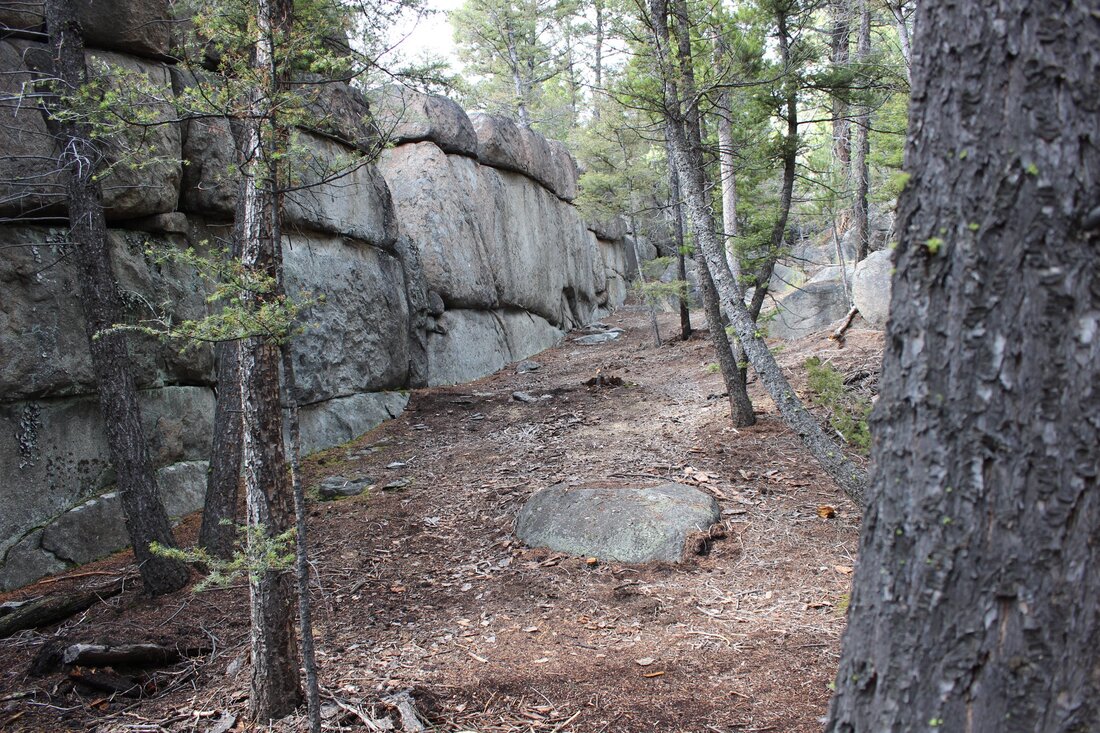 The lower portion of Sage Wall emerges from the side of a mountain near the Pipestone Megacomplex.  The largest exposed block is about 50 tons.
At the top of a megalithic wall on an adjacent mountain is a large T Block reminiscent of the circles of T blocks at Gobekli Tepe in Turkey.
INFINITY GATE COMPLEX
Infinity Gate Complex is evidence of an incredible balancing act that has endured for tens of thousands of years. Earthquakes, floods and cataclysmic events have come and gone and yet the silent stones remain...somewhat intact.
​
What was the purpose of these hundreds of intentionally constructed megaliths? The latest permutations were built over top of even older sites.
Bill Ryder and Christopher Tims enter through the back way and find a Serpentine, wide eye statue in an upper chamber at Infinity Gate Complex.
CLOUD CATCHER COMPLEX
CLOUD GRANDE COMPLEX 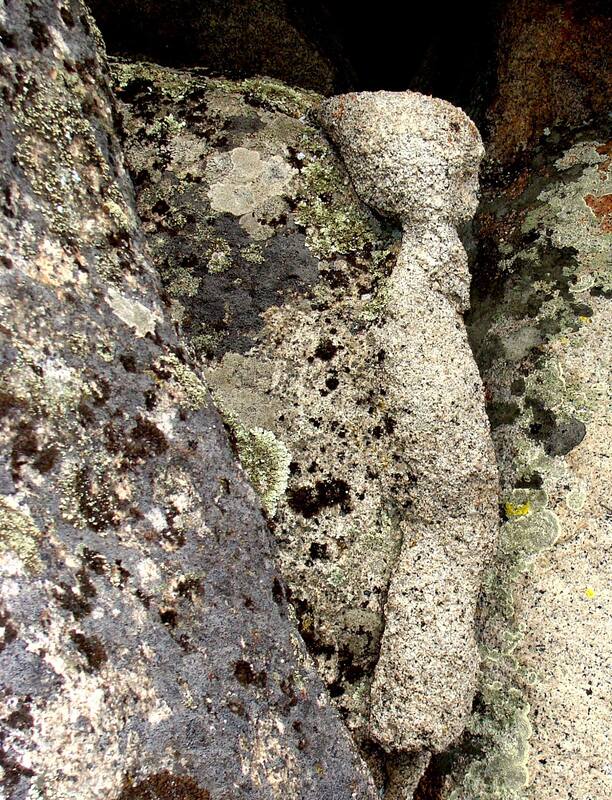 Little Gray Hood is a detailed, anatomically correct feminine miniature being that I discovered at Cloud Grande Complex a few years ago. Her tiny right eye, nose and mouth are remarkably preserved. She appears in silhouette as do most of the flash fossilized beings here at the Montana Megaliths.

There are many legends as well as current stories of the Little People in Indigenous Cultures all over the world.
​
LUMBERING COMPLEX
The Professor at Lumbering Complex in the Montana Megaliths, USA is very similar to The Pedriza megalith that I found on my favorite Russian FB group site:
https://www.facebook.com/groups/gruppa.sled/ 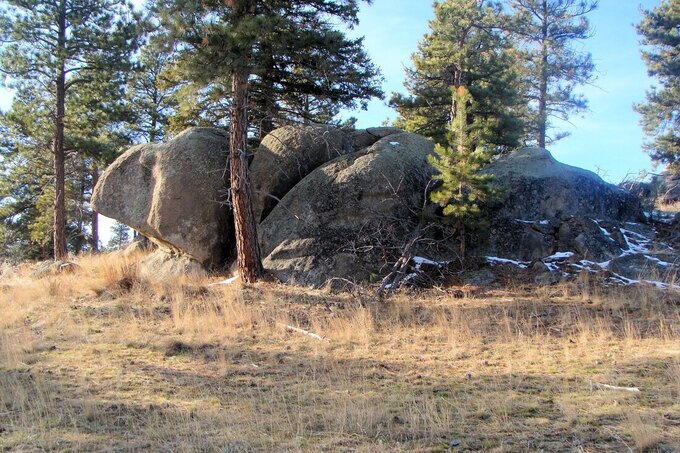 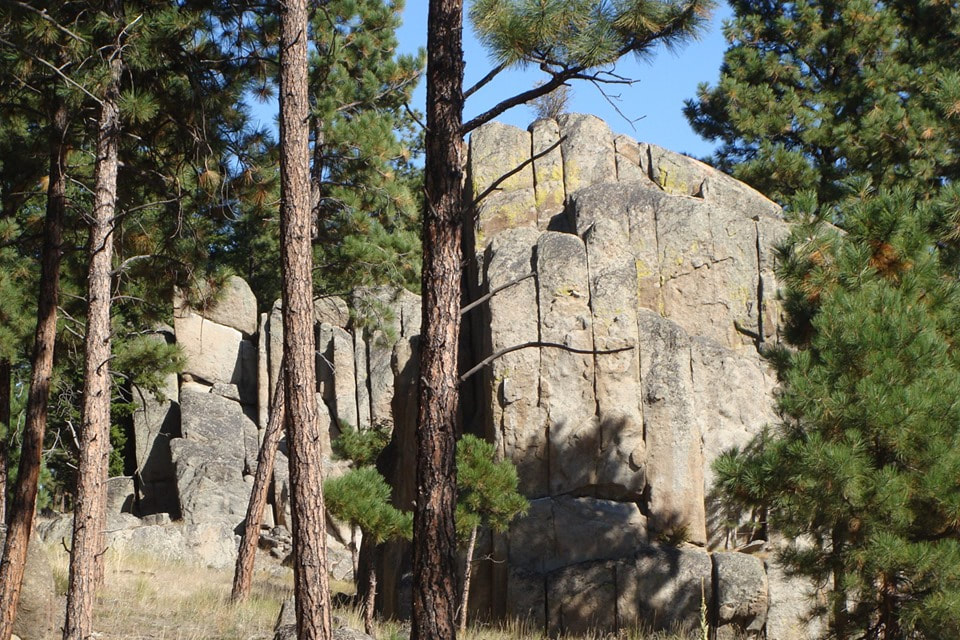 Thunder Wall at Thunder Complex
Granite naturally splits at 30 and 60 degree angles. When you discover consistent 90 degree angle cut blocks especially when the blocks are stacked up forming a flat clean surface on at least one side the area is worthy of further investigation.