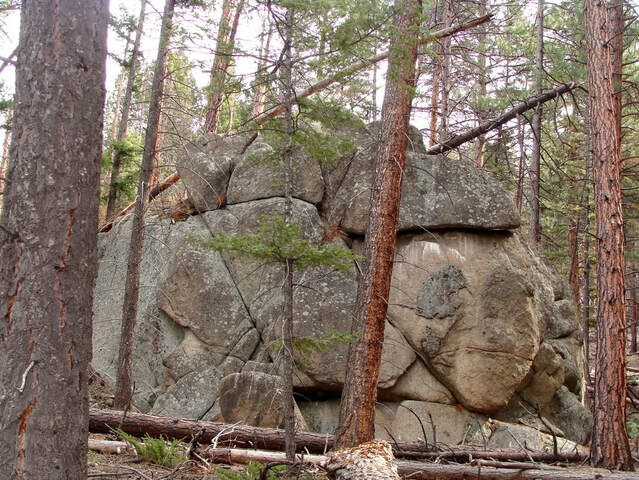 Click on MORE... at the top of each page to access a drop down box that will link you to more pages of the Montana Megaliths

By far the largest single intentionally constructed megalithic edifice discovered in the Montana Megaliths so far is Mystery Rock Prime. My husband Bill Ryder, ACE and I first discovered this site in 2016. Constructed with cyclopean granite blocks that appear to be smoothly polished, this circular terraced tower rises high above the current forest floor. On top of the circular terraces, only visible from Google Earth, a humongous dolmen occupies center stage.

We have explored the base of Mystery Rock Prime which appears to have been repaired over and over as there are different colors of granite, geopolymer coating and a variety of construction techniques visible among the fallen ruins.

It is possible to walk under the Pink Suspended Block on the second terrace which is covered with pink geopolymer concrete. High up on the block a Thunderbird image with red lightning coming out of his head features a human ear and a human eye.
Blackfeet Traditional teachings say that according to their Medicine Wheel the south is the place of Red Lightning and is watched over by the Thunderbird. Mystery Rock Prime is directly south of Chief Mountain.

On our first exploration ACE took a photograph from the second terrace of a huge flash fossilized being riding a horse-type animal in the valley below. ACE named his discovery Mystery AceRyder.
After ceremony at Turtle Moon Eyes, which is nearby, we returned to Mystery Rock Prime where Sarah Thomas took a photo of a pink stream of light with a cross bar coming up from the base of Mystery Rock Prime.
​
Mystery Rock Prime is located in the hair of the Mysterious Eye Geosculpture...a seven square mile mermaid face visible from Google Earth.

Smooth 90 degree cut edges cyclopean granite blocks formed with a semi-circular base below Mystery Rock Prime.  Similar pillars form Star Fire Duolith at Giant's Playground.
Various types of construction technology as well as a variety of colors and types of granite are evident along the bottom circular terrace. Geopolymer concrete smooths over the rough surfaces and is peeling away in some areas.  This is evidence of structural repairs as well as re-construction over epochs of time.
On the second terrace of Mystery Rock Prime a humongous single block coated with pink geopolymer is perfectly balanced. It is possible to stand underneath among the boulders.  A high relief geomural of a Thunderbird with a human eye and a human type ear protrudes from the upper right surface of the Pink Suspended Block.

Alex and ACE climb over boulders that are obstructing passage through a corridor between the walls of the second terrace at Mystery Rock Prime.

Viewed from Google Earth the silhouette of an aquatic/human face covers seven square miles.   Mystery Rock Prime is located along a mountain ridge forming a strand of her hair.

Ruins of an ancient elliptical shaped temple structure are visible from the "eye" of the Mysterious Eye Geosculpture which is the highest point in this landscape. The cyclopean block construction designed in a perfect ellipse is very similar to the ancient megalithic temples in Malta.

Temple Ellipse is positioned on the back side of a separate mountain (or ruin) just below Akers Step Pyramid. Akers Pyramid was identified by the satellite deep geoscans in 2017 and verified on the ground by Cowboybob Benda and Julie Ryder in 2020.
​
During a Skype briefing in 2017, the Professor said that their Team knew that I was deeply spiritual and so they had a surprise gift for me. By following the markers and arrows the Professor had discovered a step pyramid and ancient temples which were intact under the surface of the ground. Based on comparing the satellite deep geoscans of similar sites in Europe, Egypt and under the ocean the Professor determined that this was the "Spiritual Center" of the complex. 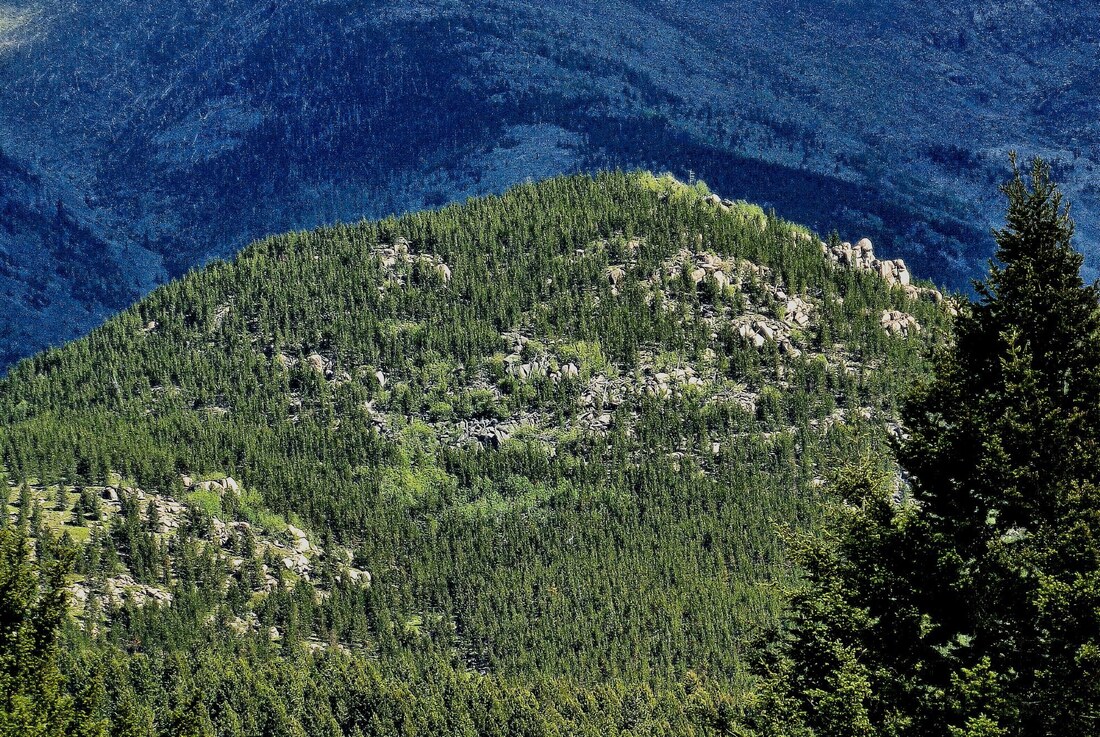 Akers Step Pyramid
​
The Satellite Deep Geoscan Guys, based out of Europe, found the Akers Pyramid in the Montana Megaliths in 2017 and provided exact GPS down to the decimal point. I was informed that there were several megaliths that were shaped like arrows and markers in the area that pointed to this pyramid. It is considered to be a major ancient sacred site as there are several stone circles surrounding it.

Measurements from Google Earth indicate that the Akers Pyramid is 525 feet by 328 feet. When we viewed it through binoculars it appears to be deteriorated as many of the megalithic structures are in this area. Intentionally constructed from granite the vast age of these ancient megaliths and the fact that they are covered with trees makes it challenging to determine the original shape. The exact 90 degree angle rectangular and squared stacked terraces leave no doubt that this is a rectangular step pyramid.

We found several stone circles both on Google Earth and at ground level. Cowboybob Benda confirmed proof points by viewing the area through binoculars from a dolmen site and from the side of a high peak which is the eye of the Mysterious Eye Geosculptue.
​
Looking down at the Akers Pyramid from Google Earth a geosculputre of a silhouetted
​male face appears.

While viewing a video about the Hawara Labyrinth in Egypt I paused at the image from Google Earth and noticed that there was a geosculpture (my word) of a feminine face looking east.  Looking for that video again.  In the meantime here is another excellent video about the Hawara Labyrinth:
Finding Ancient Egypt's Great Lost Labyrinth!
https://www.youtube.com/watch?v=PADK6Qq2hgk 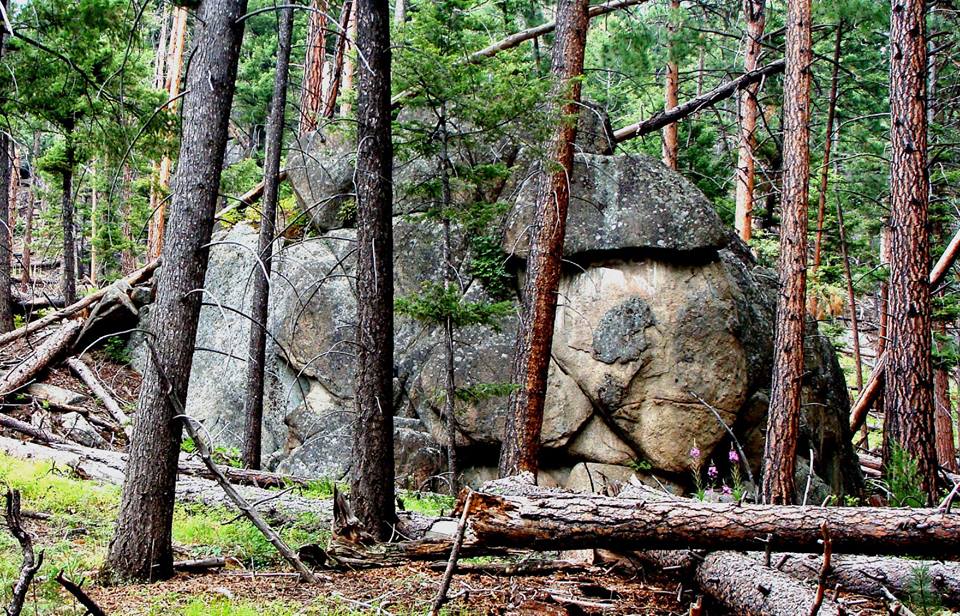 Grandmother Turtle Moon Eyes is an oval granite structure shaped like a turtle.  The most stunning feature is the separated human shaped face constructed from a different color of geoopolymer concrete. Positioned on the valley floor near the base of Mystery Rock Prime, Grandmother Turtle has become the focal point of the Mystery Rock Complex. This extraordinary granite structure is located in the hair of the Mysterious Eye Geosculpture. 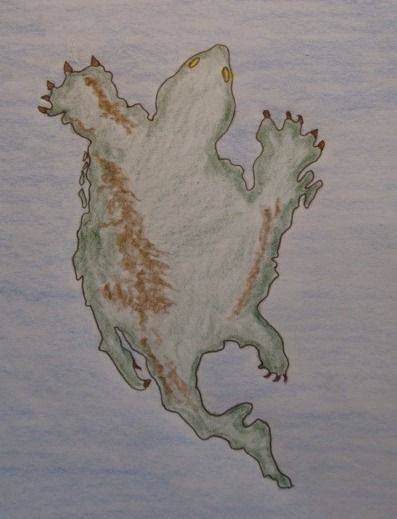 ​Ancient stone turtles are prevalent at the Montana Megaliths. North America is shaped like a turtle and so Indigenous tribes have always called this Turtle Island.

Miguel Angel Vergara
"There was in very old Times a Great-Teacher on Earth..his name was AAK-EK which  means Sacred Turtles-Teacher who came from the Stars."
The gabled secret doorway on the side of the Great Pyramid in Egypt was constructed from granite blocks framing a recessed triangle. This shape is the same configuration as the "On Switch" built into the side of Grandmother Turtle Moon Eyes
Architectural Analysis of the Great Pyramid.
http://www.ancient-wisdom.com/Ghizaarchitecture.htm#2.15
Since I discovered Turtle Moon Eyes in 2016, ceremonies, shamanic journeys and remote viewing sessions have provided us with insights into the vast knowledge that has been stored here for tens of thousands of years.
Grandmother Turtle Moon Eyes
https://www.facebook.com/julie.ryder.5095/posts/2388683667913870
FLASH FOSSILIZED OCTOPUS AT
​STAR CHANNEL MONOLITH 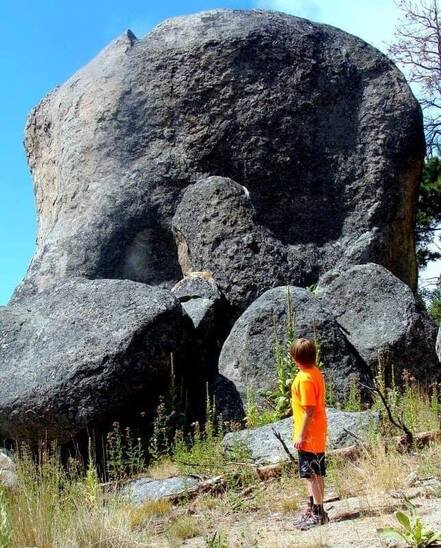 Two shiny round eyes peek out from behind a single arm covering the face of what appears to be a flash fossilized giant octopus. Ace is fascinated by the powerful presence.
https://www.facebook.com/julie.ryder.5095/posts/2984593198322911 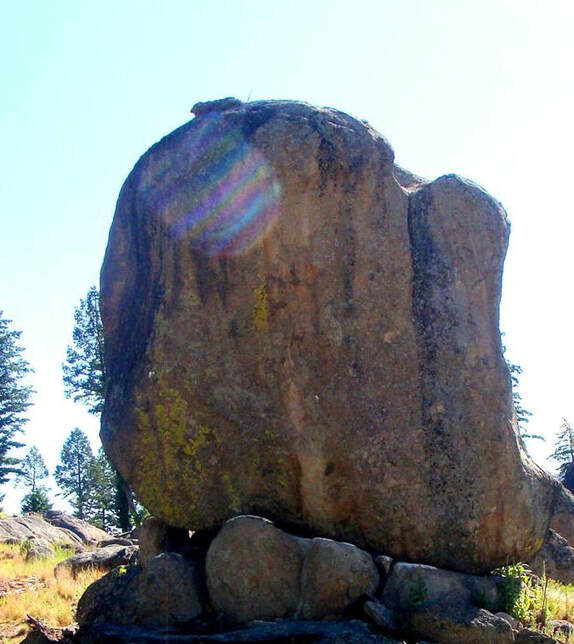 On the other side of the monolith that I named Star Channel, a depression on the top may align with the rising of a star constellation. Star Channel Monolith is balanced on a platform just like many of the dolmens and megalithic structures in the Mystery Rock Complex.
​
STAR PRINCE ON THE FRONT OF STAR CHANNEL MONOLITH
Afternoon sunlight enhanced several new features. Most obvious was the face that appeared on the front of Star Channel. His name is Star Prince as he appears to be wearing a square crown on his forehead and has an elongated head.

Star Prince's left eye is half closed giving him a sultry look. A prominent mustache graces his upper lip. His nose appears to be broken off which is not an unusual phenomena with ancient statues.
ACE at Star Channel Monolith
GODDESS DOLMEN COMPLEX Goddess Dolmen is balanced on three upright pillars surrounded with open grassland that produce a profusion of herbs and wildflowers in Springtime. An elongated head supported by a larger head dress, a protruding navel and wide feet are visible from the west side.  Goddess Dolmen is reminiscent of the hundreds of Goddess Figurines that are obviously "with child" that have been found in Crete and other European megalithic centers.
Animals Rock at the Goddess Dolmen Complex
GODDESS SQUARED COMPLEX 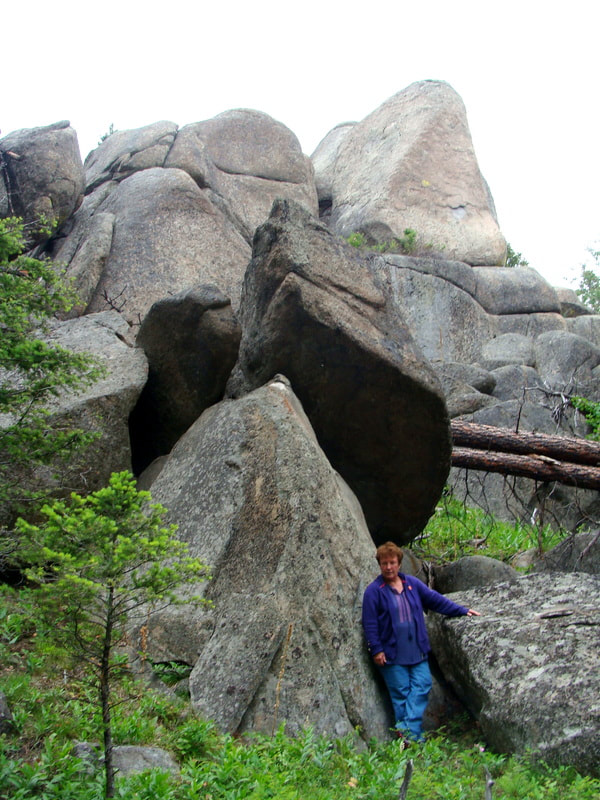 A check mark protrudes above the open book shaped block below Picasso Princess. One of our Tibetan Teachers informed us that a check mark was one of the ancient symbols left by the Masters to indicate the importance of the knowledge recorded in this sacred place.
Viewed from beneath the geopolymer coated blocks often appear as if they are wrapped like a fitted bed sheet. The border is equal distance all around and is a different color and texture than the internal structure. The corners meet at 90 degree angles. Granite naturally splits at 30 and 60 degree angles. This is a major proof point that Spirit Temple was intentionally constructed. External 90 degree angled cyclopean blocks turn the corners high up. 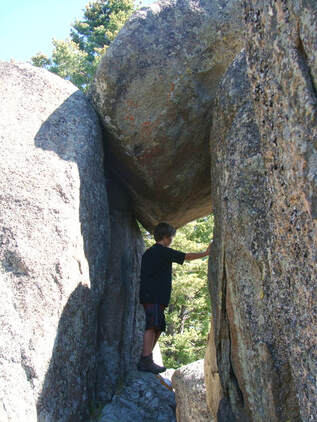 Jacob Wortinger encouraged his grandfather and me to climb to the top of a steep mountain where he had discovered Elysian Landing Tower. It just happened to be Jakob's 21st birthday.

Just like many megaliths in the area the Elysian Landing Tower was constructed fitting together jigsaw three dimensional blocks of geopolymer. Steve Wortinger, Jakob's grandfather who is an Arborist estimated the tower to be about 100 feet above ground level.

On the side of Elysian Landing Tower's smooth surface the symbol of a snake with a circle above it protrudes much like other ancient megalithic art found around the world. 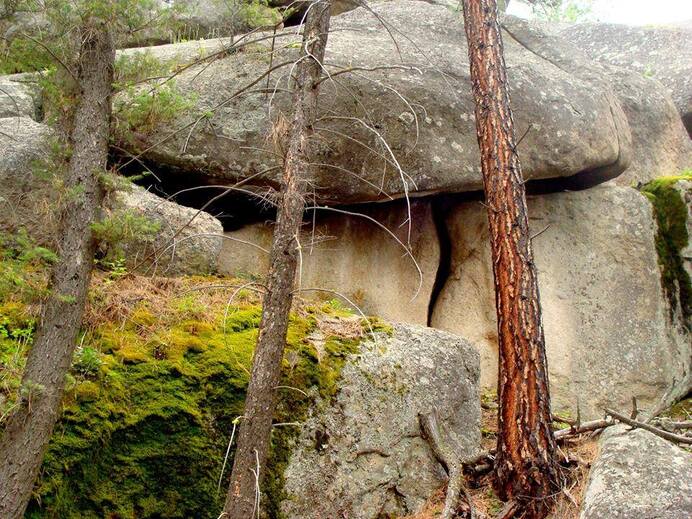